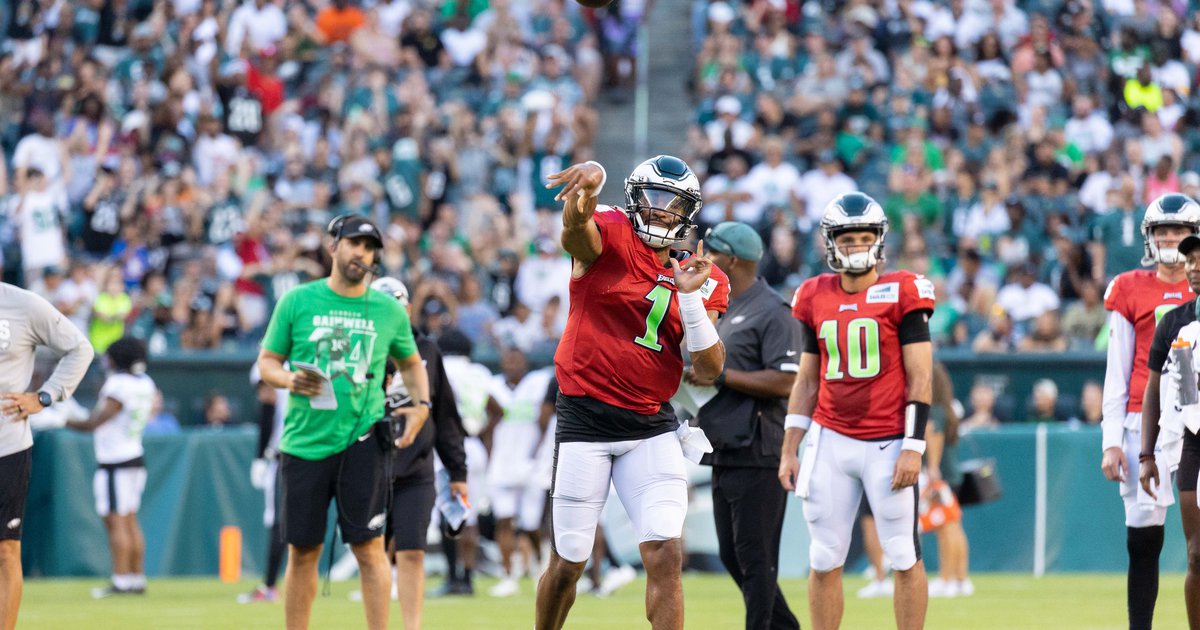 There are still a few weeks to go but football season is close, fans know it, and with the Phillies on their own tear across the street, hype is only building in Philadelphia.

The Eagles held their open practice for fans Sunday night under the Linc’s stadium lights, offering a live glimpse at the team’s new offensive star A.J. Brown and a defense highlighted by local product Haason Reddick and a returning Brandon Graham.

Then, of course, there’s Jalen Hurts, the third-year quarterback and the biggest question mark towards the team’s success in 2022.

“It’s all or nothing,” said Joshua Lynch out of Bristol, rocking a “Hurts SZN” hat and some sick Kelly green and white Nikes. “I think last season, for the full season, it wasn’t bad. I think everyone’s coming down on him too hard or not giving him another chance, especially him taking us to the playoffs last season even though we didn’t win in the first round, but I’m okay with that.

And for Lynch, the job is 4,000 yards minimum, a possible place in the MVP conversation, and for the team, an NFC East title and a divisional playoff round win.

Willis said he wanted to temper his expectations a bit, but sees the Eagles getting to the divisional round too, and repping a “Hurts SZN” hat as well, along with a No. 1 jersey – captain’s patch and all – is fully behind Hurts.

“I’ve been a fan of his since his ‘Bama days,” Willis said. “He’s improved every season despite going through numerous offensive coordinators, numerous play callers, so this is his first season – we’ve heard it reiterated multiple times – this is his first season with the same coach, the same play-caller in back-to-back seasons. So I expect immense improvement for him.

“I expect him to show us, show the fans, why he should be the franchise quarterback of the future.”

Others still aren’t sold on Hurts, but still feel this season’s team will have a lot going for them regardless.

“I’m feeling pretty positive,” said Mike Oppenheim from Harrisburg. “I think there’s some hesitation on whether Hurts has improved enough to get us over the top, but I think he’ll get there and I think we’ll get there.”

He thinks the wide receiver duo of Brown and DeVonta Smith will be giving opposing cornerbacks fits too.

“I think we have one of the best wide receiver cores in the league,” said Philly’s Jay Nicholson, who, with his son Anthony, had jerseys, a helmet and gloves at the ready for autographs afterward. “As long as these guys are coached well, run routes, Jalen Hurts can get the ball to them, I have no concerns.”

It’s hard to have too many concerns at this point in the year anyway. The Eagles are coming off a playoff run and, on paper, only got better. And camp’s in full swing with preseason beginning at the end of this week. There’s time to fix any problems.

“This is where your start dotting your Is, crossing your Ts, you know?” said Reading’s Rudy Leon, whose daughter Leeyah stood beside him with Eagles face paint and a specially plated WWE championship belt. “Any corrections you need to fix, this is the time to do it. You got 3-4 weeks to get it fixed.”

Besides, just the start of a new season carries enough excitement on its own.

Philly are you serious?? That was practice! 30k plus here at practice! Nah I love it here already. Today was fun. Only the beginning 🔥