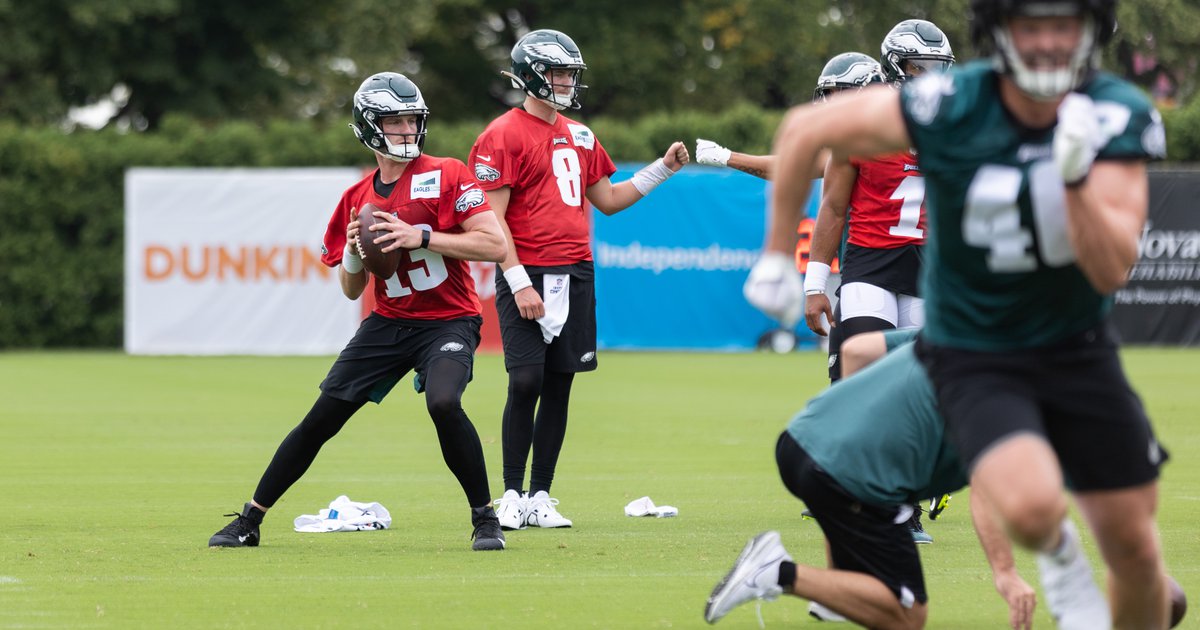 During the offseason, we’ll be taking a close look at Philadelphia Eagles players of interest who are currently on the roster, but maybe we don’t know a lot about them just yet. Today we’ll look at quarterback Reid Sinnett.

Sinnett was a 2020 undrafted free agent of the Tampa Bay Buccaneers out of San Diego University, who did not make the Bucs’ roster out of camp. At San Diego, Sinnett did not become the full-time starter until his senior season. In his final season there, he completed 66.9 percent of his passes, and threw 32 TDs vs. 10 INTs.

After his stint in Tampa, Sinnett toggled back and forth between the Miami Dolphins’ practice squad and their active roster. In 2021, he made the Dolphins’ initial 53-man roster out of training camp, but was waived during the regular season. The Eagles then claimed him, after just having traded Joe Flacco to the New York Jets.

Sinnett has not yet appeared in a regular season game in his two-year career. It would have maybe been fun to get a peek at him in the Eagles’ practice squad game against the Cowboys Week 18, but Gardner Minshew played that game in its entirety.

Entering 2022 training camp, Sinnett was a bit of a mystery, since he was not on the Eagles’ roster during 2021 training camp, and we media types never got to see him practice. It was believed by most that Sinnett was the fourth quarterback in the pecking order, even behind undrafted rookie free agent Carson Strong. However, over the first eight practices of camp, Sinnett has far exceeded his almost non-existent expectations, at least from an outsider’s perspective.

At the Eagles’ open practice at Lincoln Financial Field on Sunday night, Sinnett took some second-team reps away from Minshew. While I wouldn’t make too much of that (Minshew is still very clearly the No. 2 quarterback), that’s likely not something that would have happened if Sinnett hasn’t had a good camp so far in the eyes of the coaching staff.

I was curious to see Sinnett play, so I watched his Week 3 preseason game against the Cincinnati Bengals last year. He was impressive, going 22 of 33 for 343 yards (10.4) YPA), 2 TDs, and 1 INT. I cut up all his drop-backs in that game, and if you watch the entire video, you’ll see that his stats would have been even better if not for some bad drops by his receivers in that game (watch on YouTube here).

Here’s what I have seen from Sinnett:

• Arm strength: Throughout camp, Sinnett has been good muscling balls on sideline throws to the intermediate area of the field. He has also displayed an effortless deep ball. I’ll be curious to see him attempt some more difficult throws in preseason games.

• Accuracy: So far so good, and to all areas of the field. It’s also perhaps noteworthy that he has been accurate throwing from multiple arm angles.

• Mobility: He’s not going to win a footrace against many of the players on the team, and is not a threat as a runner.

• Pocket presence: As you can see in the game cutup above, while he’s not a fast runner, Sinnett was able to elude pressure in the pocket, and buy more time for his receivers to get open down the field.

• Moxie: He’s not a dink-and-dunker. Sinnett will take shots when they’re there.

• Toughness: As you can see in the video cutup above, on his game-winning throw, he took a huge hit and was down on the turf for a bit. However, he stayed in the game and converted the ensuing 2-point conversion.

Sinnett’s outlook with the Eagles

Minshew is the clear backup on this Eagles team, but if Sinnett can continue to build on his strong training camp, he should have a spot as the No. 3 on the 53-man roster. Minshew is scheduled to become a free agent next offseason, and Sinnett could maybe be a contender for a No. 2 job in a year if he continues to progress. He would be a far cheaper option as an exclusive rights free agent in 2023 than an established veteran.

But first, we’ll likely get a good, long look at him in the 2022 preseason games.