Why the Eagles should retire Nick Foles’ No. 9 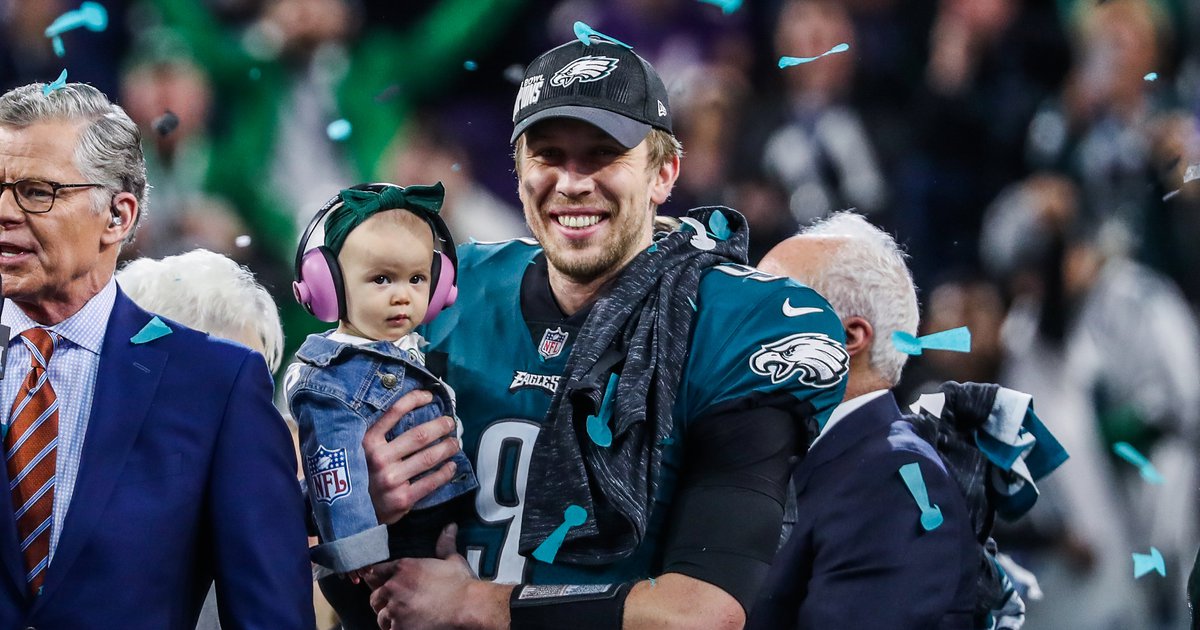 I’m someone who has a passion for the minutiae in sports. Mascots, logos, uniforms, basketball court designs, ballpark food, etc. Over the last week or two, I’ve gotten heated about Philly sports teams retiring former players’ numbers. It all started when the Phillies handed out the No. 35 jersey that Cole Hamels wore when leading the Phillies to the 2008 World Series. I didn’t like it! That grew into the PhillyVoice sports staff making arguments about which players do deserve to have their numbers retired in the city. This was the type of discussion I was built for.

The most blowback I’ve gotten from that article is regarding the one choice that was the clearest of all to me: Nick Foles. Here’s what I said:

Jeffrey Lurie should sell the team if they don’t retire Foles’ number. As the entire Delaware Valley knows, the Eagles have won just one Super Bowl in franchise history and Foles was the MVP of that game. It should be an easy call and it infuriates me that people could ever consider otherwise.

I stand by it!

I’ll share some of the responses I’ve gotten to me going to bat for Foles’ No. 9 being retired via email and on social media.

The only numbers that should be considered for retirement should be Hall of Fame players. If you retire every very good but not great player’s number, 100 years from now there will be no numbers left. You will be having numbers like 107, or 10B. Retired numbers are for the greatest players of their era.

Are we going to retire the numbers of all players who had a great game? This is what happens when staff reporter needs something to write about..

Stop it. Just stop it.

Gonna run out of numbers.

Foles is a ring of honor guy, not a retire the number guy.

Mark Rypien and Jeff Hostetlers numbers haven’t been retired either …

Alright, I’m just going to rip them all apart at once…

I don’t know, in any circumstance on planet earth, why I would care in the absolute slightest about Mark Rypien and Jeff Hostetler.

To make it known, Rypien was Washington’s quarterback in the 1987 and 1991 seasons when the team won the Super Bowl. He won Super Bowl MVP in the latter of the games. Rypien was hurt during the 1987 campaign and Doug Williams was eventually the quarterback who lifted Lombardi Trophy as a backup that year. Jeff Hostetler filled in for Pro Bowl quarterback Phil Simms late in the 1990 season and led the Giants to a Super Bowl win over the Bills.

The Eagles should do everything in their power to not be Washington. Washington is perhaps the biggest dumpster fire organization in all of professional sports. Whatever Washington’s doing, the Birds should be doing the opposite. Rypien did not win his franchise’s first Super Bowl win. Nor did Hostetler. Neither played against the greatest defensive mind of all time (heck, that guy was on Hostetler’s team’s coaching staff…). Neither outplayed the greatest player in the history of the sport in the Big Game.

The Giants will retire Eli Manning’s No. 10 assuredly. That’s clear, right? He’s going to be in the Hall of Fame rather easily even if he objectively doesn’t deserve it. Manning was frustratingly average for a lot of his career, but obviously had two electric playoff runs, toppling Tom Brady and the Patriots in the Super Bowl both times. If you’re going to compare the career of Foles to that of another NFC East quarterback, it’s Manning, who’s basically Foles without the football royalty bloodline.

Who cares about other teams and cities? To even imply that Rypien and Hostetler are as important to their respective franchises and fan bases as Foles is in Philly blows my mind. What player will have as many stories told about them in the coming years and generations as Foles in Philly? Would Jeff Hostetler cause hysteria if he walked down the sidewalk in New York City? No. I don’t want to be New York or D.C. I want to be Philly. The uniqueness of Foles’ time in midnight green is so tied into the devotion he’s received in Philadelphia in the time since he won the Super Bowl.

What people don’t understand is that Foles cannot be easily put into some box that defines his career. I say without hyperbole that he’s had the weirdest career of any NFL player in my time watching the sport. He was a messianic figure in 2013 when Chip Kelly had the Eagles zooming. It was one of the most efficient passing seasons in league history. He led the league in touchdown rate, yards per attempt, yards per completion and passer rating. No one has ever put up the rate stats he did in ’13 while being a team’s primary starting QB (via Stathead). It doesn’t make sense, but that’s the Foles saga for you.

He was traded in 2015 after going 14-4 as a starter with 40 touchdown passes against just 12 interceptions in his previous two years. He nearly quit football after bouncing around the league before signing with the Eagles in the 2017 offseason. Foles then saved the Birds’ season twice in as many years, going 4-1 in the playoffs and bringing cheers, tears, beers and to the Eagles faithful. He’s once more found himself bouncing around the league as a backup signal-caller. The totality of the Foles experience!

There will never be another Nick Foles. Not in Philadelphia. Not anywhere. There is no “well, he didn’t hit this benchmark…” concept that applies to him. The Eagles can only win their first Super Bowl once. Only one player can be the team’s first to win Super Bowl MVP, to be the first starting quarterback to hoist the Lombardi Trophy. That’s Foles. I couldn’t fathom wanting to see another dude wear No. 9 after that. Are they going to run out of numbers eventually? I don’t know, pal. I don’t envision the Eagles rolling off a handful of Super Bowl wins during the rest of my lifetime. I think we’ll be safe if we just honor the guy who accomplished what no one before him can do. Seems pretty fair! If the Eagles win a dozen Super Bowls and have to start handing out triple-digit numbers, I can’t imagine Birds fans would mind.

That “honor” goes beyond simply throwing him in the Eagles Hall of Fame. Are we equating him with David Akers now? What is the point of retiring numbers at all (if you don’t think there’s a point to begin with, fine!) if Foles’ runs in 2017 and 2018 don’t merit that utmost tribute? Like I said, they’re not going to be winning a million Super Bowls. There’s a decent chance I die one day and Foles remains the franchise’s lone Super Bowl MVP winner. Eagles fans don’t need to pretend they’re the 49ers or Packers here.

Foles won’t end up with a bust of his head in Canton for all those sticklers, but Foles’ uniforms from both his seven-touchdown game in 2013 and his Super Bowl win have their own displays at the Pro Football Hall of Fame. Few, few players in the sports are coming close to touching that. Whenever I make my first trip to Canton one of these years, I’ll be as amped to see Foles’ multiple spots in the HOF as much as I will be to see the likes of Brian Dawkins and Chuck Bendarik.

Saying Foles had a “great game” on February 4, 2018 is like saying da Vinci’s “Mona Lisa” is a “great painting.” A great game? Alec Bohm had a “great game” on Friday when he hit two home runs in a Phillies regular season win. Foles dropping 41 points on the best coach of all time in a Super Bowl win is more along the lines of wielding the power of a thunder god and bringing an entire group of people salvation than merely having a “great game.”

I was such an analytical nerd in my early 20s, but that whole movement and line of thinking has jumped so far the wrong way that I’m circling way back around. The emotionless rationality of that deprived me at times of the pure fun that sports are supposed to bring. Writers and fans have gone to lengths to look at player’s year-over-year regular season numbers and stack them up alongside the all-timers that they forget that the whole goal is to a win championship.

Looking at, say, Dan Marino, his lack of a championship doesn’t diminish what he accomplished, but I’d bet he wakes up every day wishing he had a Super Bowl ring on his hand. Foles, conversely, played one of the best games a quarterback has ever played on the biggest stage in American sports and came up victorious against the best team and player of my lifetime. Are we going to really chalk that up as a backup QB having a hot streak instead of talking about the improbable glory of it all? It’s more than fine to give as much weight to Everest-like postseason peaks as it is to excellent regular season longevity. Why is the latter inherently more “important” than the former when it comes to these legacy discussions? People were making deals with the devil for decades hoping for a Super Bowl in Philadelphia!

When I think about the greatest performances I’ve seen in my time watching the Eagles, I’ll probably think of Nick Foles first. I’m certainly not alone there. As I said, there is only one Foles in Philly and, in turn, only one No. 9.