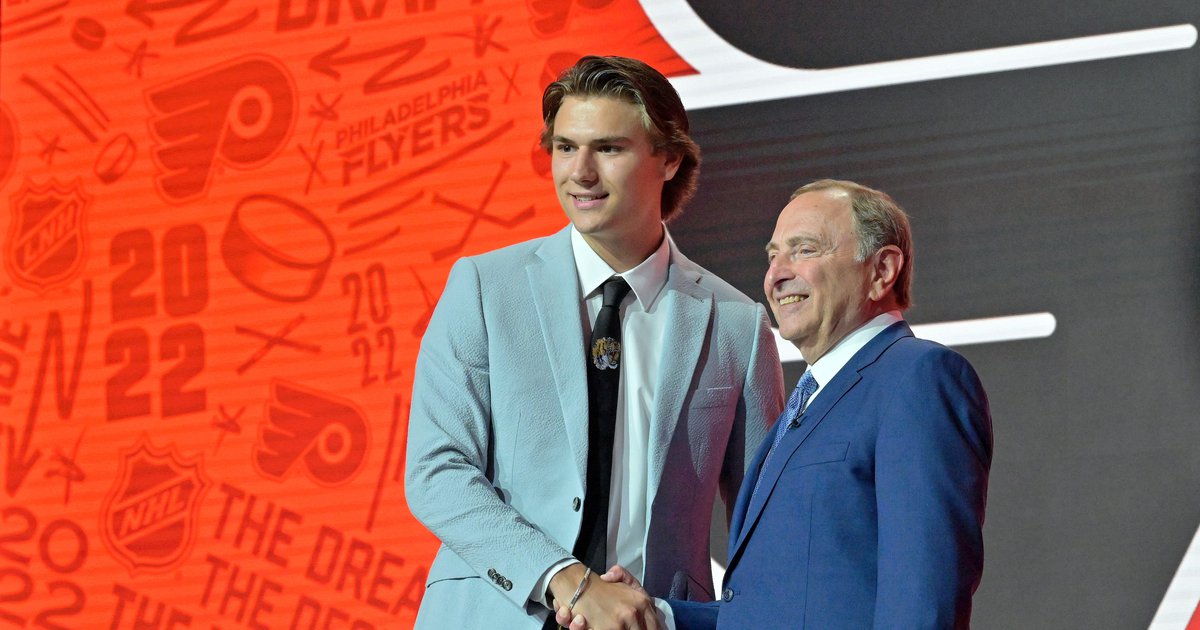 The pick is in: Cutter Gauthier goes fifth overall to the Flyers in the 2022 NHL draft.

With his size at 6’3″ and 201 lbs., a booming shot, and an overall well-rounded skill set, the 18-year old forward could be a prospect that comes in and helps the NHL club sooner rather than later.

Gauthier scored 34 goals and 31 assists for 65 points with the US National Development Program this past season, and while not the best skater in the draft, he has been able to use his aforementioned size, shot, and hands to his advantage while also being able to shift between center and wing.

Ranked the No. 3 North American skater by NHL Central Scouting, Gauthier is committed to Boston College and will play out at least a freshman season in the NCAA before a potential jump to the pros is considered.

The Flyers held on to their first-round pick, even after rumors of trade talks with Chicago for star winger Alex DeBrincat — moved to Ottawa before the draft for No. 7 and No. 39 overall picks — and hope Gauthier’s selection is another step toward shifting the franchise’s fortunes.

After a disastrous 2021-2022 campaign that saw the team completely bottom out and finish with the league’s fourth-worst record, the front office moved to hire John Tortorella as head coach in the hopes that he can instill the immediate roster with structure and discipline, all while betting that their younger players (Travis Konecny, Ivan Provorov, Oskar Lindblom, etc.) can return to the form they’ve lost in the past couple years and that their veterans (Sean Couturier, Kevin Hayes, and Ryan Ellis) can make fully healthy returns in 2022-23.

The draft, meanwhile, is the means to secure future talent, and with the club’s highest draft pick since 2017 — the second overall pick that was used on Nolan Patrick, who has since been dealt away — the Flyers are hoping they hit the mark here, especially in a first round that proved highly unpredictable compared to previous years. (Shane Wright, for example, long considered the consensus No. 1 pick, ended up slipping all the way back to Seattle at No.4).

“I still think you got to make sure you get high-end talent,” general manager Chuck Fletcher said during last week’s pre-draft press conference. “High-end talent as we just saw in the playoffs, you look at Tampa and Colorado. They have a lot of high-end talent that is packaged in often times in big or competitive or speedy frame. I think we’re certainly like everybody wanting to get the most competitive players we can get but you can’t forsake talent. You have to make sure you get talent and where we’re picking you should be able to find competitive people that have talent.”

Here is a quick look at the Flyers’ first-round picks, now including Gauthier, from the past decade under former GMs Paul Holmgren (2006-2014) and Ron Hextall (2014-2018), and Fletcher, the current GM:

*2021 1st-rd. pick was sent to Buffalo in trade for Rasmus Ristolainen

Barring any trades, the Flyers will have five more picks to make on Friday in rounds 3-7. Here’s where they fall:

Kyzir White continues a strong summer with interception in Eagles preseason debut
A far cry from May: Phillies are revitalized after early 2022 woes
Second half observations: Jets 24, Eagles 21
Handing out 10 awards from the Eagles-Jets preseason game
Read Previous