What they’re saying: Sixers doing the best they can to help Joel Embiid 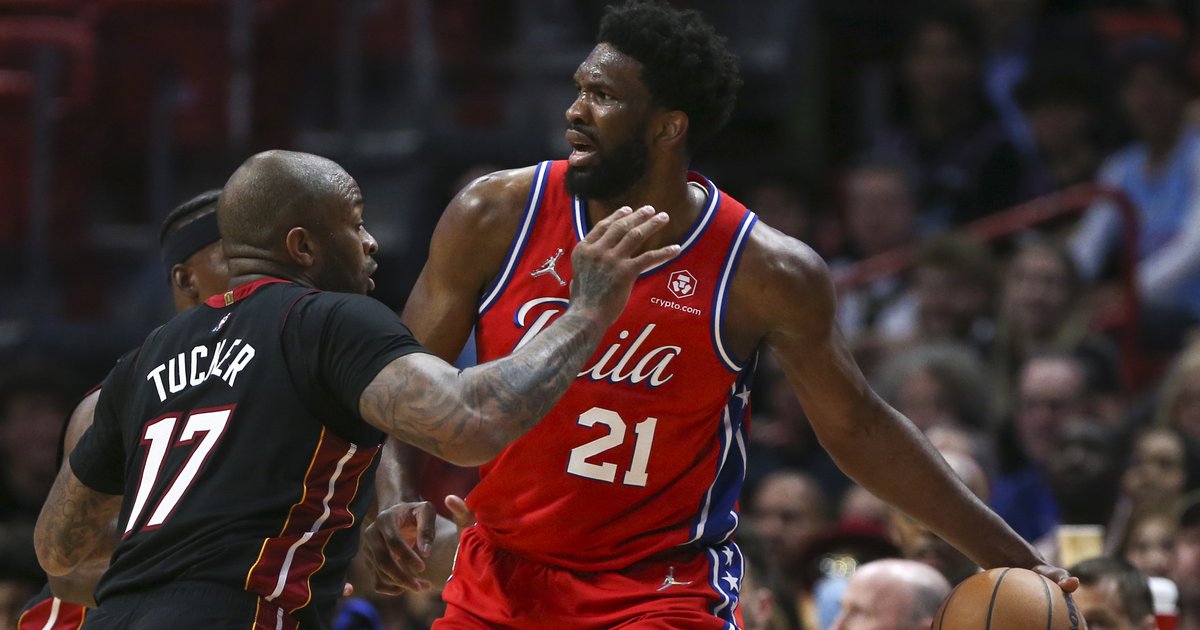 The chances of the Sixers landing Kevin Durant — who asked the Nets to trade him Thursday afternoon — seem pretty slim, due in part to a lack of Durant’s stating a preference to go to Philly, and also due to the Sixers lack of assets to send Brooklyn in a trade.

It is likely the Nets will get a better offer than the Tobias Harris and Matisse Thybulle package the Sixers could make, though adding Tyrese Maxey to the mix certainly would have to make the Nets front office think twice.

There are no reliable reports linking Philly and Durant, though it would make sense for them to be interested, and for Joel Embiid to have a vested interest in anything Daryl Morey and the Sixers can do to get the team into the mix for a title in 2023.

Source: It’s unclear whether Kevin Durant is interested in joining the 76ers, but Joel Embiid has made it clear to management that he wants them to exhaust every option in trying to acquire Durant.

The Sixers have already made a bunch of relatively minor moves to satisfy Embiid’s need for help next postseason. Assuming they don’t make an earth-shattering blockbuster trade for a superstar, will they have an improved roster in 2022-23? Here’s a look around the NBA media landscape at what they’re saying about the team’s early offseason moves.

The Ringer looked at the most intriguing moves from Thursday’s action across the NBA and their first point was a Sixers one, highlighting how Philadelphia is addressing the major weakness it had last postseason: zero depth. Adding P.J. Tucker on a three-year deal at age 37 seems like a risk, but he is a huge upgrade.

The solution they needed was wearing a Heat uniform: P.J. Tucker, the small-ball 5 locking up James Harden, shooting 44 percent from 3, and sneaking under the baseline for rebounds. The Sixers landed the 37-year-old former Rocket with a three-year, $33.2 million contract, including a fully guaranteed third year that might hurt later. (Morey also brought aboard Danuel House, another familiar face from Houston, on Thursday, and traded for Rockets draftee De’Anthony Melton on draft night.) But you’ll take it, because Tucker could be the key to unlocking the urgent present, bringing frontcourt depth, lineup versatility, and perimeter defense to a team desperate for it. (The Ringer)

CBS went through the most active NBA teams this offseason, naming some as winners and some as losers. The Knicks, Nets and Wizards, for example, were losers from the Eastern Conference while there seems to be a noticeable lack of winners. The Sixers, however, made the cut. Here’s why:

James Harden hasn’t signed his new contract yet, but he obviously agreed to give up enough annual salary for the Sixers to afford P.J. Tucker, whom they signed for just over $33 million over three years. That’s a big score. Tucker will seriously lift Philly’s defense and slot perfectly as a corner shooter for Tyrese Maxey and Harden drive-and-kicks. Throw in De’Anthony Melton, whom the Sixers landed on draft night from Memphis for the No. 23 pick and Danny Green, and the Sixers are having a very nice offseason. (CBS Sports)

Getting the band back together

Want some more positive reinforcement that Morey’s offseason so far has been a good one for the Sixers title aspirations? Here’s John Hollinger’s thumbs up, thumbs down writeup of the Tucker signing and the rest of Philly’s moves on the margins:

You can argue there is a bit of Buddy Ryan Syndrome at play here, with Sixers general manager Daryl Morey replaying his greatest hits from the Houston days by bringing back Tucker and House to join James Harden and his one-time draft pick De’Anthony Melton. However, one can also argue, more emphatically, that the Sixers finally have a couple of wings who fit their Harden-Embiid-Harris-Maxey core with the additions of Tucker, House and the previously acquired Melton.

The Sixers needed James Harden to opt-out of his $47 million for the season to pull this off (as our Shams Charania reported he will do) and will be hard-capped the rest of the season, but can bring Harden back on a three-year deal for roughly $110 million and proceed at least fairly comfortably through the season. Philly still likely has some issues ramping up to the levels of the Bucks, Celtics and Heat in the East, but between these additions and one or two subtractions (including a name below), this is a much more coherent roster than it was a year ago. (The Athletic)

Let’s move on from the bench pieces to the actual superstars. The Sixers are, after all, doing whatever they can to flank Embiid and company with the best role players to help them succeed. But Embiid can’t do it alone. He will need the team’s backcourt to emerge as one of the best in the NBA. And according to Bleacher Report, the Sixers currently sport the seventh best starting guard situation in the league, despite regression from Harden and youth from Maxey. More from BR:

… Furthermore, Harden is still one of the game’s best foul-baiters (he was third in the league in free-throw attempts per game) and passers (he was second in assists per game).

He could continue to average 21, 10 and seven (as he did after he was traded to Philly), and plenty would suggest—probably truthfully—that he’s not the same player he once was. But, come on—21, 10 and seven is still an elite playmaker.

And while Harden may be regressing, his backcourt mate, Tyrese Maxey, is almost certainly headed the other way. In 2021-22, the 21-year-old averaged 17.5 points and 1.8 threes while shooting 42.7 percent from three.

And if early returns are any suggestion, the games of the two meshed right off the bat. With both having the ability to get to the rim (Maxey as a slitherer and Harden increasingly like a battering ram) and hit from the perimeter, the Sixers were plus-12.8 points per 100 possessions when they were together. (Bleacher Report)

Kicking the tires on Kyrie

We’ll go from the optimistic to the absurd to finish things here, as a report from Stephen A. Smith (if you believe his reporting) was certainly interesting this week. As Kyrie Irving’s opt-in or opt-out saga dragged on, the TV personality said that the Sixers made an offer for Irving’s services.

“(Irving was) insulted, he’s looking for other teams, throws out a whole bunch of smoke and mirrors.

Hermann tried to make sense of this, the quote above of course coming from Smith on ESPN’s free agency countdown show.

The Sixers were so far in on a Kyrie Irving pursuit that they told him they were willing to guarantee him a 3-year deal?

What exactly that trade would’ve looked like is unclear, though it would’ve started with Tobias Harris to make the money work and also certainly would’ve included Matisse Thybulle, who the Nets liked back during the James Harden negotiations but was eventually kept by Sixers President of Basketball Operations Daryl Morey.

In general, I like that Morey isn’t afraid to pursue any potential avenue to making the Sixers better. But adding Irving… I don’t know. It seemed pretty clear from the jump that Irving was just tossing out names, considering the main reported reason for Harden’s departure from Brooklyn was friction with Irving. It wouldn’t make sense for the two to pair up again, right? And yet Morey still wanted to double check and see what could’ve been. (NBCSP)