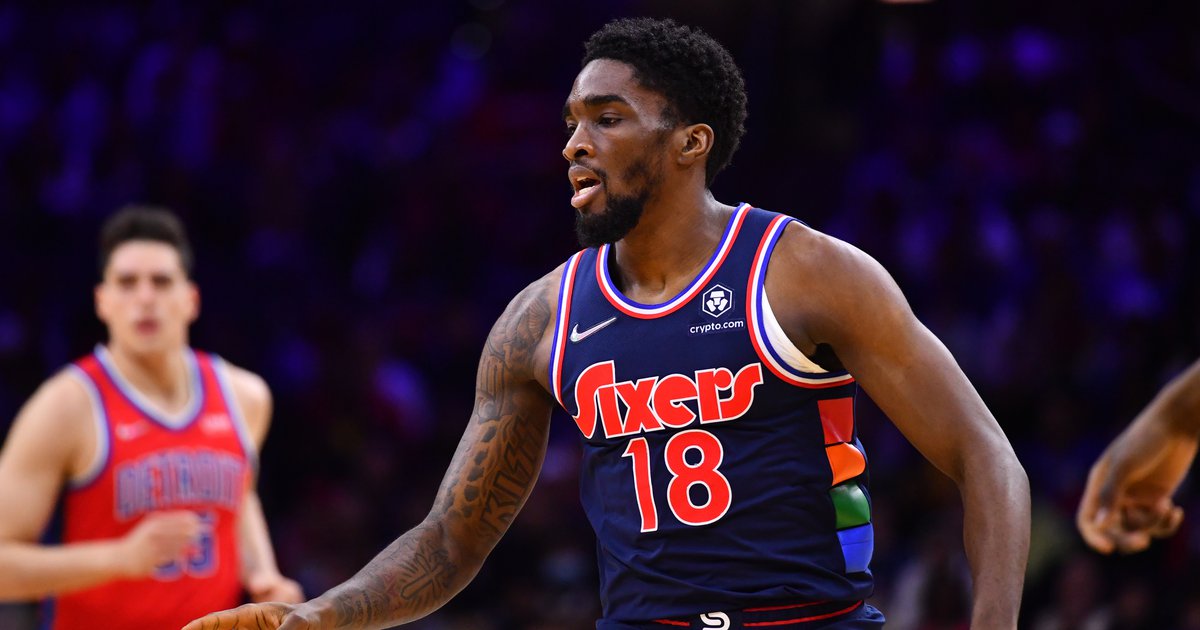 The Sixers exercised Shake Milton’s team option, a team official confirmed to PhillyVoice on Tuesday morning, following through on a decision most people viewed as a foregone conclusion heading into free agency. But after some reporting to the contrary mid-month, Philadelphia now officially has Milton on the books for next season.

From an accounting perspective — and who doesn’t love talking basketball strictly in dollars and cents — it was a no-brainer decision on Philadelphia’s end. While the Sixers were likely hoping for Milton to turn into something more over the time he has spent on his current contract, it costs them almost nothing to keep him on the roster, just shy of $2 million for a semi-reliable guard off of the bench who has proven capable of helping the team out in both regular season and playoff performances. In fact, the Sixers may never have gotten to a Game 7 against the Atlanta Hawks in 2021 if it was not for a late Shake Milton outburst in a critical Game 2 win.

On basketball merit, Milton has been one of Philadelphia’s most confounding players, a player who can prop up the bench unit by himself or shoot/dribble the opponent right back into a game on the wrong night.  2021-22 was Milton’s worst year since his rookie season way back in 2018-19, when he was still an occasional bit player on a team with a different coaching staff and much different roster. Many of his struggles in 2021-22 can be explained by absences from the lineup — Milton missed a stretch in late December due to a bout with COVID-19, and after just two games back in the lineup, Milton suffered a back contusion that knocked him out of the lineup until mid-February. And, it’s fair to note, Milton has frequently been the guy asked to do a bit too much on a bench unit that has been undermanned and overextended for most of the past two seasons.

Those caveats aside, the biggest issue for Milton over the past two seasons is that he has watched his three-point effectiveness dip dramatically compared to where we saw him in 2019-20 and what people expected out of him leaving college. When Milton left SMU following his junior season, he had completed three consecutive seasons of elite shooting on medium-to-high volume, but he has only matched that pace in one professional season. Last year’s mark of 32.3 percent was a big fall-off even when we consider how health disrupted his year.

The key for Milton, it would seem, is getting back to a place where his role is focused predominantly (if not close to exclusively) on being a knockdown catch-and-shoot player. 2020-21 was Milton’s best season on volume, with the backup guard basically running Philadelphia’s second unit by himself, but Milton’s best season from an efficiency standpoint came when the bulk of his shots came on spot-up jumpers:

There should be no shortage of catch-and-shoot opportunities created next season, between James Harden running point, Joel Embiid drawing doubles in the post, and Tyrese Maxey putting pressure on teams with his pace off-the-bounce. De’Anthony Melton will likely get the first crack at minutes among other guards on the roster, but whoever puts their hand up and claims the role as the fourth guard in the rotation should get a steady diet of quality looks.

One of the positive side effects of adding a quality depth piece in Melton is that the competition for minutes becomes a real battle instead of a situation where the Sixers simply have to try everyone. Milton is a player Rivers likes, but if they end up benefitting more from movement shooting one night, maybe it’s Furkan Korkmaz who gets a look over him. Maybe Isaiah Joe, bearish as I am about his ability to stick, steals the 10-15 minutes off of the bench on a night with hot shooting. The difference now is you’re not forced to play basically all of those guys (or at least 2/3) in order to even put together a rotation.

The other big key for Milton, if he’s to stay in the rotation, is stepping forward as a defender. None of the other guys competing for that spot at present are exactly shutdown defenders, but inching back toward an elite level on that end of the floor is a big point of emphasis for the Sixers this offseason, as Daryl Morey noted in the hours following the draft.

“We were the No. 1 defense two years ago,” Morey said last Friday. “We were good last year. We want to make sure we improve that.”

The acquisition of Melton and further moves in free agency will work toward that goal, but some of their improvement will have to come from within. It’s not reasonable to expect a guy like James Harden to suddenly change his stripes on defense, but Milton has every reason to refocus his efforts toward becoming a reliable three-and-D type player. He won’t turn 26 until training camp in late September, he will have less offensive responsibility than he’s had in years, and for whatever he lacks in foot speed and top-end athleticism, Milton has wingspan to spare if he commits to sharpening his mind and body to defend bigger players. Korkmaz is not exactly Scottie Pippen out there, but his bench counterpart has at least shown signs of defensive progress at times over the past two seasons. A small baby step or two coinciding with a return to form as a shooter would go a long way.

(On the shooting front: there may also need to be a conversation and work put in to get Milton back to basics from a mechanical standpoint. He has had too many breakdowns and inconsistencies in his jumper the last year-and-a-half or so, and ironing that out is probably priority one for him.)

Exercising Milton’s option doesn’t necessarily mean he’s for sure back next season, mind you, as the upgrade in the backcourt makes it easier to attach him in any sort of salary dump deal should the Sixers need to free up a bit of extra cash to make a signing happen (say, P.J. Tucker at the NTMLE). He’s a playable guard on a minuscule contract, so you wouldn’t struggle to find him a home if push comes to shove.

The best outcome for Philadelphia, though, is probably one where they’re able to get more out of a healthy Milton and get surplus value from a player on a team-friendly contract. Milton has flashed the talent to impact games at his best, but we’re at the point in his career where consistency must be demanded, not just hoped for. In a smaller role with less responsibility on his plate, the hope will be that he can find that next season.