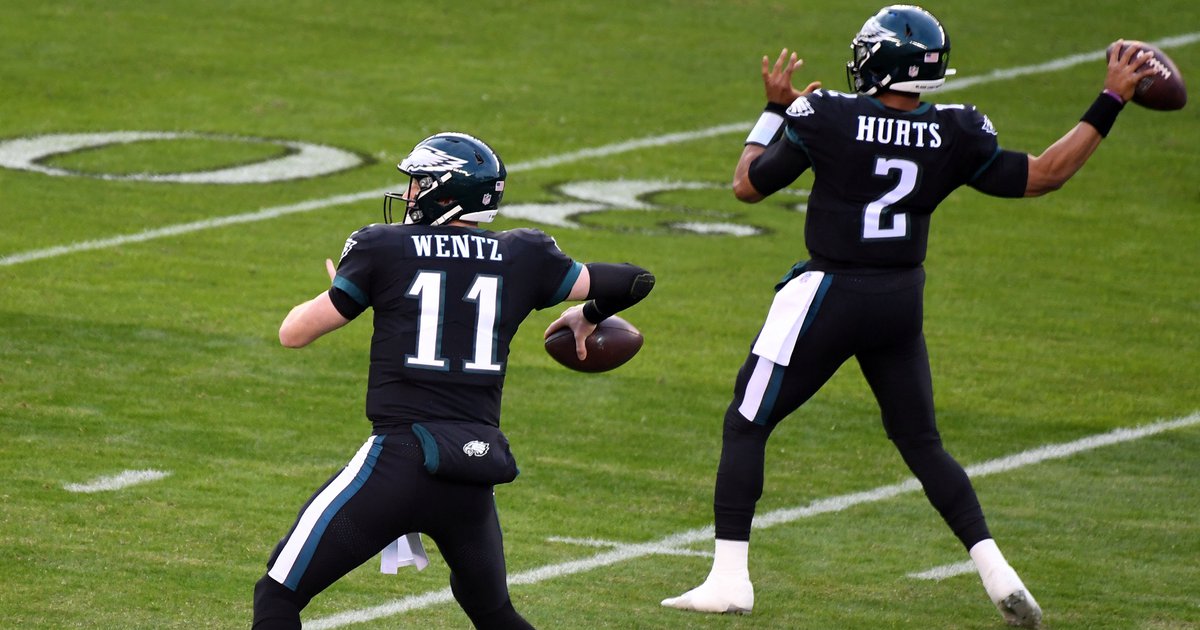 We’re still stuck in the slow point of the NFL offseason. Wanna get your blood boiling a bit?

Alright, let’s hear him out.

“Carson Wentz, Washington Commanders quarterback. I’m still having a hard time spitting that out of my mouth. I literally almost said Philadelphia and the Colts at the same time there when I was about to say what team he was on.”

It’s no secret at this point that Wentz fell out of favor fast in Philadelphia and even faster in Indianapolis.

Holding on to the ball too long, trying to force plays that just aren’t there, the numerous reported leadership issues, it’s all been discussed ad nauseam.

But natural talent and a belief in untapped potential can buy you a lot of chances in the league, which is what Washington is hoping it can figure out, and why Simms is still relatively high on Wentz despite a pretty critical breakdown of him as seen below (starting at 22:22).

“Wentz can make some really game-changing plays and throws,” the former Tampa Bay quarterback said with a whole lot of ‘buts’ surrounding that point.

Here’s what Simms said about Hurts last week at 25 after leaving him off the top 40 list entirely the year before:

“I was wrong last year. I think that’s fair to say. He was one of those first few guys off my list. I had questions about him. The way the 2020 season ended, I just went ‘I’m not sure. I’m not sure he can do it.’ Proved to me he can do it, but within that, I didn’t come away watching every Jalen Hurts throw from last year or anything going ‘Oh, he’s definitely the future! They got it, there’s no doubt about it. I was totally wrong.'” (NBC Sports)

Hurts threw for 3,144 yards and 16 touchdowns while running for 784 and 10 more on the ground last season, but he struggled running a pass-heavy attack early on and it was only after rookie head coach Nick Sirianni began prioritizing the run that things turned around.

Wentz, on a Colts team that was desperate for any kind of stability under center, threw for 3,563 yards and 27 touchdowns. He also had Jonathan Taylor, the league’s leading rusher, behind him, but Indy completely fell apart down the stretch and missed the playoffs in large part because of Wentz’s stubbornness in forcing and extending plays.

The Colts were done with him after only a year and now Wentz is on his third team in as many seasons.

The Eagles made a late push to the playoffs, and for this year at least, are going to try to keep building off Hurts.

There’s a lot of room for debate there.

Our own Shamus Clancy published his QB rankings on Tuesday, grouping the current starters together based on tiers. Both Wentz and Hurts are guys you win with, not necessarily because of, based on his metric.