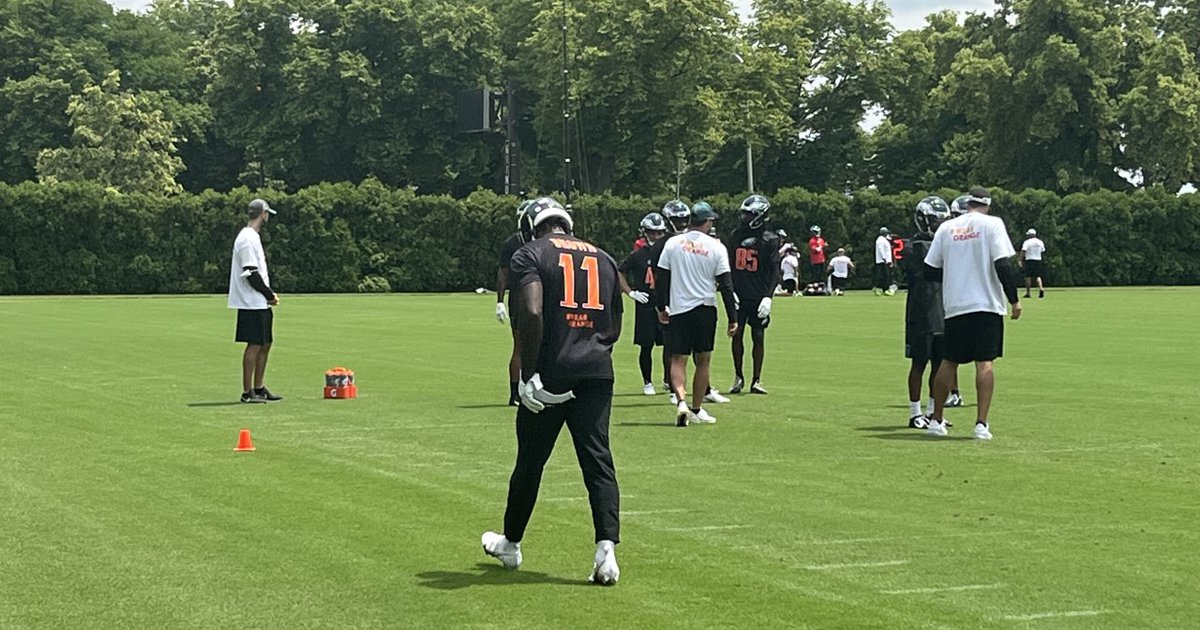 The Eagles opened up their organized team activities to the media on Friday, taking the field at the NovaCare Complex in orange-numbered practice shirts to recognize Gun Violence Awareness Day.

For the media, it was a first look at A.J. Brown in action and a chance to see the continued development of Jalen Hurts and DeVonta Smith. However, the Eagles wanted to make it clear that the ever-concerning rise in gun violence and mass shootings across the nation isn’t out of their minds.

In their media availability post-practice, several Eagles took a moment, or moments, to talk about the recent string of mass shootings in Buffalo, Uvalde, Waco and Tulsa. They all had the same message: Something has to change.

On Thursday, after a gunman killed four people in an Oklahoma medical building the day before, Brown tweeted “Innocent people are getting killed from mass shootings daily. Change the gun laws, Please. Your kids’ lives may depend on it. Praying for families that lost their lives. Praying for this country right now.”

And while he didn’t have much different to say following practice, he reinforced his stance.

“My opinion, I really feel like… I really want something to happen. I don’t know what, but too many innocent people are losing their lives daily to mass shootings. My condolences go out to those who lost their lives and to be honest, I’m not into politics, but I just want to raise awareness to the situation and what’s going on so that’s why I tweeted that.”

Innocent people are getting killed from mass shooting daily.
Change the gun laws Please. Your kids lives may depend on it . Praying for families that lost their lives. Praying for this country right now.

Like Brown, Slay admitted that he isn’t big on politics either. But one thing he knows for sure is that the current state of things isn’t right.

“I’m just a guy that wants to stop the violence. I don’t know too much into the politics with the guns, laws, and all that kind of stuff, but I just know a lot of stuff has been going on with guns that should not be (happening) with kids and people that age. I don’t know too much about it, but I’m trying to do what’s best for the world and right now that’s not it.”

Hurts didn’t need to be asked about the country’s gun problem. He sat down and got right into how he feels, and he went on for a while.

“We have a lot of stuff going on in our world right now. A lot of very unfortunate, fatal things and events and deaths. And when I sit back and think about all of that, it’s…what’s happened in Buffalo, Uvalde and Tulsa, whether it’s a grocery store, a hospital, an elementary school… Fear… That’s no place for fear… Fear doesn’t belong in those places, and me sitting here, a big brother, a big cousin… I  can’t even imagine my little cousins not coming home from school, my little sister not coming home from school, my dad not coming home from work… You see what we’re doing here at the Eagles, trying to bring awareness to it and it’s a real thing. I know that a lot of people out there in this community and in the world can relate to that… I  just… I just feel like I wanted to own my impact with that because I know it’s something that we all feel and ultimately impacts everybody.

“I know everyone sitting here may have kids, may have someone they love, and it all matters, so whether that be just spreading love, preaching what you have, but ultimately getting this artillery off the streets and making true change, and that’s something that we urge in all of our communities. In the community of Philadelphia, over 40 people passing away this weekend, it’s gotta change, you know… it’s gotta change… just...

Hurts was asked if he was aware of his platform and what drove his desire to speak out. For him, it was the least he could.

“It’s my duty. this is the least that I can do, is to try and bring awareness to it. Obviously, we all know what’s going on, we see what’s going on. It starts with every one of us — everyone has their own unique way that they can make change — but ultimately what are you doing to try and influence the right things to be done?”

The Eagles will be auctioning off their orange practice shirts to benefit two Philadelphia-based anti-violence organizations: Mothers In Charge, which supports families impacted by violence and takes up prevention, intervention and education initiatives and Frontline Dads, which was founded in 2001 to be a support system for at-risk youth.

The team also organized a gun buyback event with the Philadelphia Police for Monday at Lincoln Financial Field, where anyone giving up their weapon will receive a $100 gift card via the Eagles and the Children’s Hospital’s Center for Violence Prevention.