Eagles OTA observations: Jalen Hurts airs it out at the NovaCare 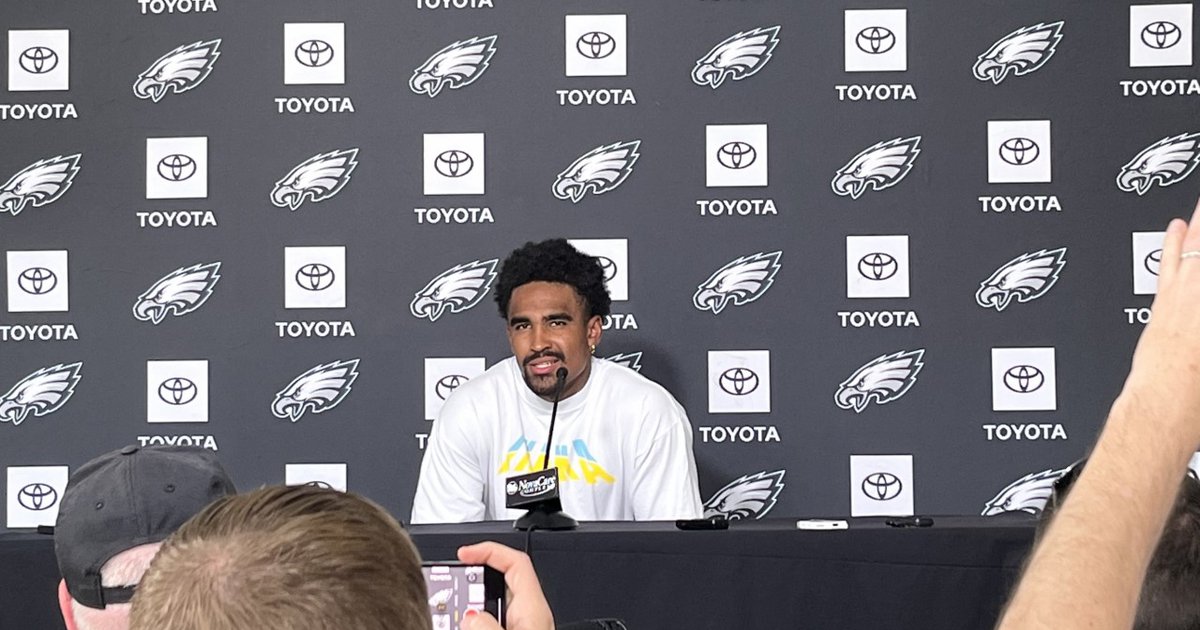 Eagles organized team activities were finally open to the media on Friday, as reporters got their first glimpses of A.J. Brown in action. Here are my running observations from what I saw down at the NovaCare Complex:

• It was a super quick practice. Media members saw less than an hour combined of individual drills and actual 7-on-7 action.

• J.J. Arcega-Whiteside was seen practicing with the tight end group for the first time after changing positions this offseason. With the jersey number rules implemented last year, JJAW can still wear No. 19, but I had wondered if a number change would have helped him symbolically turn a new page on his career. As for that transition to tight end, the lower half of his body did look a bit bigger and I’m assuming he will keep trying to put on weight as the summer goes on.

• Another player who appeared a bit stockier is Boston Scott. This isn’t meant as a slight at all. I’m certainly not saying he looked like Jordan Howard out there, but he had a “Muscle Hamster” feel.

• Kenny Gainwell was the only player I saw whose cleats were almost entirely midnight green. That’s team spirit.

• Brown and DeVonta Smith both wearing visors? Aside from the obvious talent this duo presents, the best I’ve seen in my time watching the Eagles, their vibes are tremendous.

• As individual drills ended and the practice shifted to 7-on-7 work, Hurts’ passing went on display. On his first throw, he connected deep down the right sideline to Smith for what we can ostensibly call a “touchdown.” Outside of that throw he had to Quez Watkins in Week 2 against San Francisco last year, it’s the best deep ball throw I’ve seen from him. Yes, it’s just camp. A single throw doesn’t move the needle on Hurts’ career either way, but he was taking more shots down the field on Friday, as I will continue writing, and it’s a welcomed element to his game. It was exciting for the first real Eagles action I saw and it brought loud cheers out of the other offensive players.

• Hurts’ second throw of the day went to 2021 practice squad wideout Deon Cain, deep in the middle of the field. It was essentially double coverage with a safety helping out the cornerback, but Hurts connected on a fine throw that once again can be chalked up as a “touchdown.”

• Safety Jared Mayden, another practice squad guy from last year, had a tough, physical pass breakup in the flat on a pass from QB Reid Sinnett. Great energy there. No. 41 is being shared on the roster currently between Mayden on defense and undrafted rookie free agent WR/return specialist Britain Convey. On Friday at least, Mayden was the true No. 41, “Highlander” style.

• Hurts’ first completion to Brown was on a quick underneath throw. Nothing flashy, but, hey, the two best friends were able to connect.

• Perhaps more so than any of the deep shots he took, Hurts’ best pass of the day may have been a close window throw between a linebacker and a safety to tight end Jack Stoll 15-20 yards down the field. There was zip on that one. It’s the type of throw that the Eagles didn’t see Hurts make often in 2021.

• Hurts had another vertical shot to Smith down the left sideline. Safety help was imminent over the top. It was a bit of a wobbly pass, but DeVonta Smith is DeVonta Smith and he was able to haul it in for another “touchdown.” It wasn’t Hurts’ finest throw of the day and one that would’ve been susceptible to being picked off on an NFL Sunday, but, akin to the way Hurts’ best throws don’t totally define him, that’s the same case with one that was a bit off here.

• Hurts tried to attack downfield once more on a pass to Brown. He had Brown open, split between a corner and a safety, but overthrew him with a little too much oomph on the ball. That’s not what the case usually was with Hurts in 2021, as he underthrew receivers at times on those deep targets. Nevertheless, I’m optimistic that Hurts and Brown will connect on at least a few of those throws for scores come this fall.

• On the practice’s final play, Mayden once again came up with a bang-bang pass breakup, this time in the middle of the field on a throw from undrafted rookie free agent QB Carson Strong. I can’t say I know what this summer and season holds for Mayden, who, again, was a practice squad guy last year, but with a dearth of talent at safety, perhaps he could play his way on the roster.

• Eagles players wore orange practice shirts on Friday as part of the Wear Orange movement to honor survivors and victims of gun violence on National Gun Awareness Day. Hurts spoke at length after practice about the recent shootings in Buffalo, New York, Ulvade, Texas, and Tulsa, Oklahoma. He frequently said, “Something needs to change.” Here’s an in-practice look at the shirts: 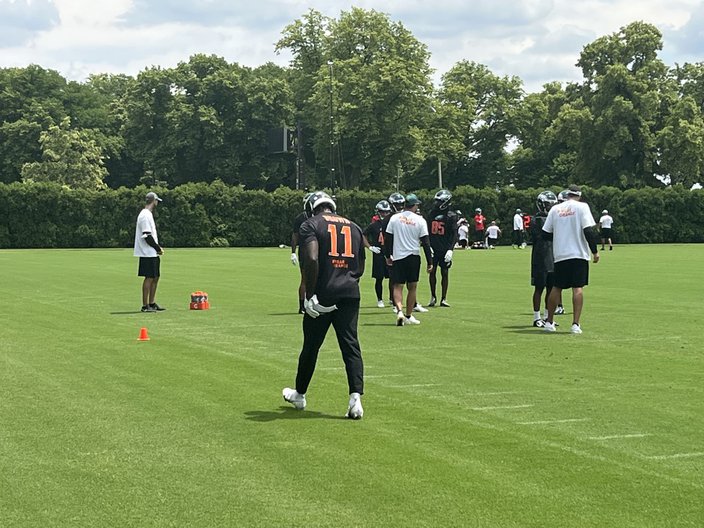 Additionally, before this practice session, offensive coordinator Shane Steichen stated that he would be the Eagles’ play-caller in 2022. I wrote about that here.