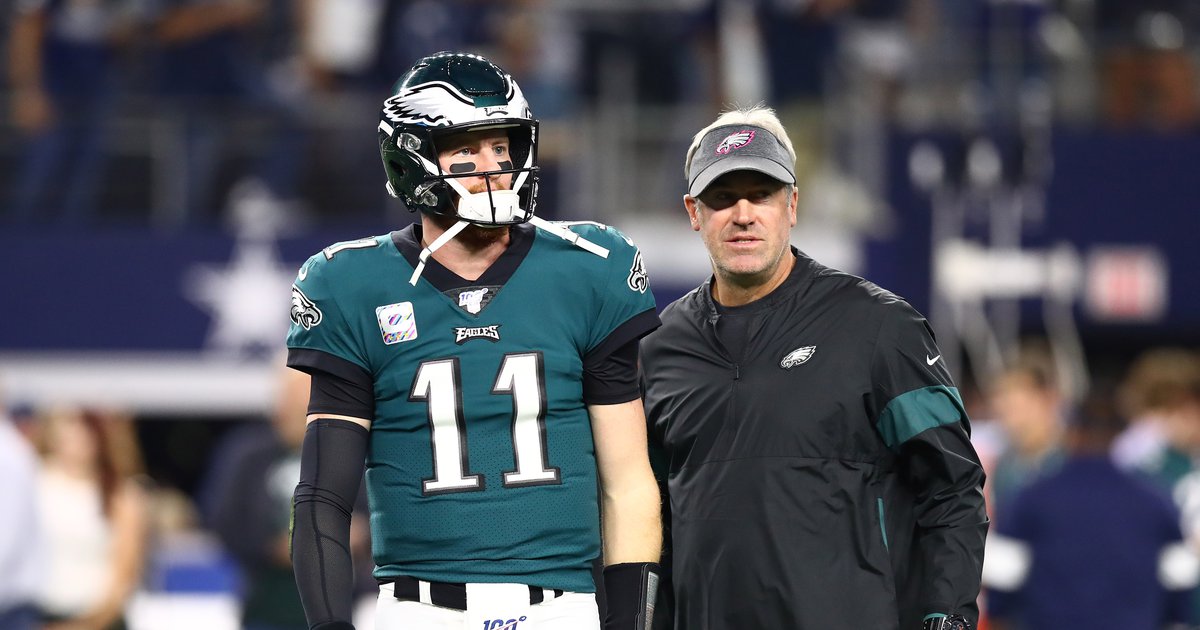 We already know the slate of 17 games on the Eagles’ schedule for 2022-23, as well as how Jimmy Kempski thinks that slate of games will go for the team this season. But the Eagles can only control what they can control, and they might need help along the way.

There will also be a bevy of games across the schedule that have rooting interest for Birds fans for one reason or another, whether they involve Commander Carson or big balls Doug — each of who’ll be making the rounds this season — or draft positioning.

Here’s a look at some non-Eagles games across the 2022 NFL schedule that will be of importance to Eagles fans:

Depending on what reports you believed at the time, there may have been beef between Doug Pederson and Carson Wentz in the weeks leading up to each of their respective exodus’ out of Philadelphia. Interestingly, the pair will face off to kick off the 2022 NFL season in a game between two teams expected to stink this season.

On Sunday night of the first week of the NFL season, Eagles fans will no doubt be eager to see what Dallas looks like — their main competition for the division crown — as well as Tom Brady’s return with the team that ousted Philly from the playoffs last January.

Russell Wilson was on Eagles fans’ radar for a large portion of the offseason and the NFL will have him open with his return to Seattle.

One of the keys to the Eagles making the playoffs this year will be taking advantage of an easier schedule than their rivals in Dallas. Can Big D fend off the reigning AFC champs a week after playing the Bucs?

The other divisional games will have a big impact on the Eagles, and this Monday Night game will certainly be of interest to Birds fans.

These two division rivals are each on the Eagles’ docket this season, and it will be interesting to see how each one looks as the Birds anticipate playing each. They are two of the toughest teams on the schedule.

Doug Pederson will coach against Frank Reich. The Colts should roll the Jags here, right?

The Eagles have their bye in Week 7 and will play Pittsburgh in Week 8. This game is in primetime so it’s a good chance to study up on their upcoming opponent.

The Carson Wentz “revenge” tour continues, as the QB will face his second former team this week. Will he get a round of applause in Indy? Doubtful.

In a relatively weak NFC with a lot of parity expected once again, this game could pit two of the conference favorites and two potential Eagles playoff opponents.

The NFL is giving the Packers a mini-bye week ahead of their Week 12 game against the Eagles, with them playing Thursday night against Tennessee. Will Green Bay have momentum and rest on their side before facing Philly?

Thanksgiving’s middle game (the one on TV while you are eating, probably) is a clash of Eagles division rivals. You’ll likely be rooting for New York here.

Is it possible that by Week 13 neither of these teams are relevant in the division? Very much so. Is it possible Carson Wentz is hurt or benched by Week 13? Also likely. Still, a division game is always of interest to Eagles fans.

Another battle of teams expected to represent the NFC in the Super Bowl in a weak and wide-open NFC.

We have yet to mention that the Eagles hold the Saints’ first-round pick in 2023, which means basically every game of theirs is a game fans will have a rooting interest in. This game late in the season is of particular interest, as the Eagles will be playing New Orleans at home one week after this. There is a chance that Week 17 non-division game could be key for the Eagles getting into the postseason, so keeping an eye on the state of the Saints a week prior will be important to do.

The Eagles could be scoreboard watching this last weekend, as they themselves will play the Giants. Will that game matter? Will the Cardinals vs. 49ers game have seeding implications? Will Rams vs. Seahawks? The Cowboys play the Commanders — will that one matter?