What they’re saying: The Sixers were soft 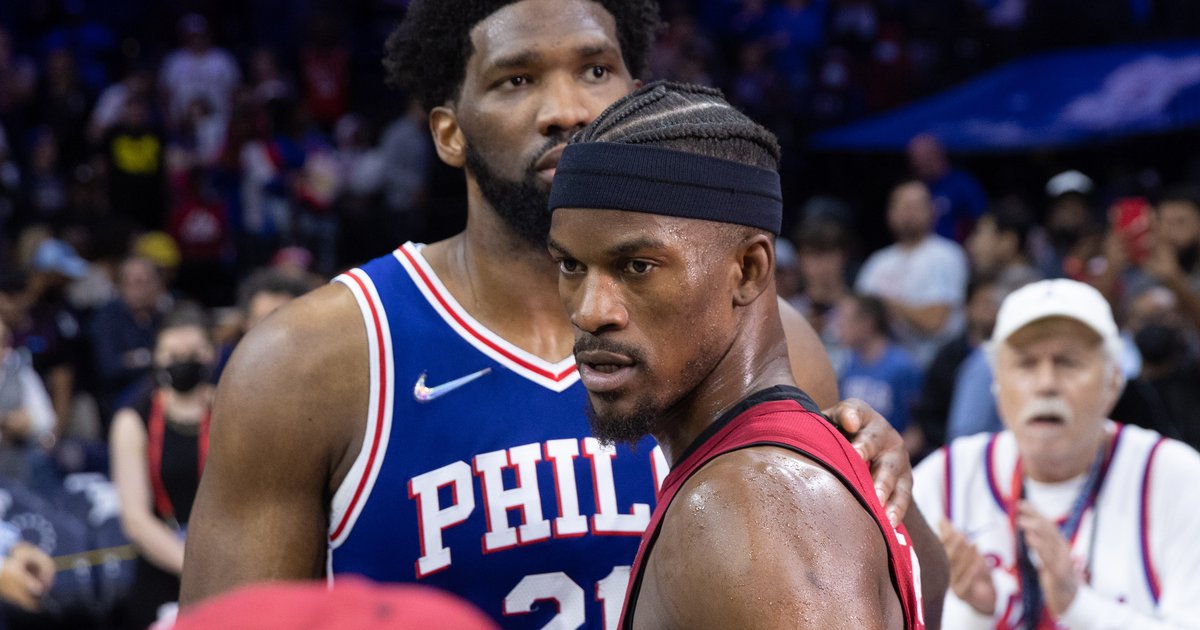 The Heat pulled away and you just knew that was it.

There was next to no pushback in the second half. Joel Embiid playing through multiple injuries couldn’t make enough of a difference, and James Harden disappeared in the big moment once again.

For the fourth time in five seasons, the Sixers bowed out in the second round, and on the brink of elimination, made no real fight to change that.

If there’s a common throughline between everything that’s being said about the Sixers the day after, it’s this: This team was soft.

Here’s what they’re saying about the Sixers:

Let’s start with our own Kyle Neubeck, who wrote that Miami was clearly the better, and tougher, team in nearly every aspect of Game 6 and much of the series.

“Miami, as Doc Rivers was mocked for pointing out after the game, was clearly a better and tougher team than the Sixers at the end of six games. There was no hiding from that fact. But when the word “toughness” is thrown around, it means a lot of different things to a lot of different people. It manifested all across the box score and all across these six games the teams played over the last week and a half.

“For starters — the offensive glass. As the Sixers were in the process of folding for good, it was Miami who kept twisting the knife sticking out of their back, running through and around Philadelphia players for rebounds. They more than doubled them up in the final game, and the series count ended at 60-42 in favor of Miami, an accurate reflection of how badly they were pasted across six games.” [PhillyVoice]

They used to have it

The Sixers weren’t always like this though, and what made it sting the most was that the guy who gave them a backbone was on the other side of the floor dominating, as The Athletic’s Rich Hofmann writes.

“The Sixers once had one of those guys, who was wearing No. 22 for Miami on this night. Three years ago, in the same spot, Butler had 25 points, eight rebounds and six assists as the Sixers forced a Game 7 in Toronto. They ultimately lost that series, but there weren’t questions about toughness after it was over. On Thursday, Butler had 32 points, eight rebounds and four assists.

“As the game ended, Butler rubbed it in. He waved goodbye to the crowd after scoring his 32nd point. He said in his postgame interview that he still wishes he were playing with Embiid. He invoked the big contract the Sixers gave to Harris that summer. The Sixers have made countless organizational errors over the years, but letting Butler walk in 2019 ranks at or near the very top if drafting Markelle Fultz still haunts them the most. Butler very well could continue to haunt them, as he did with four brilliant performances to knock them out of the playoffs.” [The Athletic]

Mistakes of the past

After the final buzzer, Jimmy Butler said he wished he was still playing with Embiid. Embiid echoed a similar sentiment.

Though there’s more to it, ultimately, the Sixers made a choice to move on from Butler three years ago. That decision came back to haunt them.

From The Ringer’s Dan Devine:

“You can understand why Embiid might wish he was still going into playoff battles with Butler, who, since going to Miami, has proved himself a legitimate superstar and foundational franchise cornerstone. He spearheaded the Heat’s collective bubble lock-in, propelling them on a surprise run to the Finals. Once there, he authored two of the finest individual performances in Finals history, pushing the heavily favored Lakers to six games, despite Bam Adebayo and Goran Dragic both suffering injuries in Game 1.

“He’s a relentless competitor who answers all those questions Philly’s currently asking itself—about effort and mental and physical toughness—while also producing at an even higher level than he did when in the bubble.” [The Ringer]

Next year marks the 10th anniversary of the start of the Process. What have the results yielded after all this time? The same one-and-done purgatory that the Sixers wanted put an end to.

From The Inquirer’s Marcus Hayes:

“Thursday night was the latest indictment of The Process, begun in 2013, now highlighted by a fourth second-round playoff exit in the last five years. These exits have been earmarked by youth, injury, or, in 2019 with Butler, bad luck and poor chemistry. This one? Lack of effort.

“In a word, the 76ers are producing the same sort of postseason mediocrity The Process sought to avoid.” [The Inquirer]

On the hook for Harden

Probably no one wants to hear it after Thursday night’s performance, but as Keith Pompey breaks down, the Sixers are going to owe James Harden a lot of money.

“Harden is certainly a good player, but having him as one of your two best performers doesn’t come without drawbacks. He has lost a lot and is not a good defender. And he’s not playing at a maximum-salary contract level at this stage of his career.

“That’s why the Sixers will be in a weird position this summer.

“Harden has said that he’ll opt into his $47.3 million player option for next season. If he picks that up, he’ll be eligible to sign a four-year, $233 million contract extension with the Sixers that would pay him $61.7 million in the 2026-27 season.” [The Inquirer]

In need of investigation

And after Harden’s performance Thursday night, Stephen A. Smith’s immediate reaction was that it should be looked into.

“The Heat were the better team, but it was a deplorable performance by the Philadelphia 76ers. We know Danny Green got hurt, we know Joel Embiid wasn’t 100 percent. That performance by James Harden requires an investigation. How in God’s name do you go 22 minutes in the second half and attempt one shot. It was a horrific performance, anemic and impetent performance by James Harden, and I’m really interested in seeing what the Philadelphia 76ers are going to do with Doc Rivers, because I smell something and it don’t smell right at all.” [ESPN NBA Countdown]

If it’s any consolation, RDCWorld has uploaded hilarious videos upon the elimination of Doc Rivers coached teams the past couple of years, and without fail, this year’s edition came through.