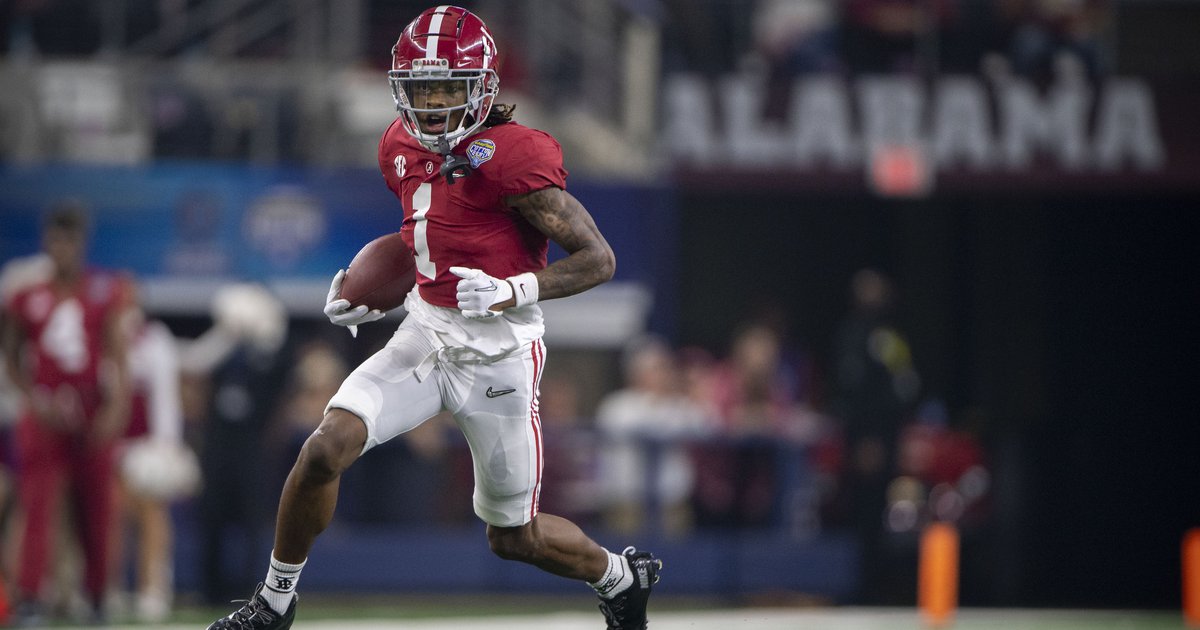 The day of the first round of the 2022 NFL Draft is finally here. In case you missed our final seven-round Eagles-only mock draft or my lone full first-round mock draft, be sure to check those out.

Earlier this morning, we took a look at who the local guys are projecting to the Eagles in the first round. Here’s who the national guys are predicting, submitted without commentary of my own.

Pick 15: Jameson Williams, WR, Alabama: Williams would likely be the No. 1 receiver off the board if he didn’t tear the ACL in his left knee in the national title game in January. He’s explosive but might miss some time early in the season. This would mean back-to-back-to-back first-round receivers for the Eagles, who might just move on from Jalen Reagor.

Pick 18: Trent McDuffie, CB, Washington: This could be a defensive end, but the No. 2 corner spot on the other side of Darius Slay is a huge hole. McDuffie is a tough and physical corner with versatility.

Pick 15: Jameson Williams, WR, Alabama: Another year, another first-round wideout for the Eagles. And while Williams is still recovering from a torn left ACL, he is a burner who can beat you over the top in the vertical game or after the catch. Having Williams and DeVonta Smith running routes would ease some pressure on quarterback Jalen Hurts, even though we won’t see both wideouts on the field right away.

Pick 18: Trent McDuffie, CB, Washington: We just projected a game-breaker on offense opposite DeVonta Smith, so how about one on defense opposite Darius Slay? McDuffie is an outstanding tackler with great burst and instincts.

Pick 15: Kyle Hamilton, S, Notre Dame: Hamilton is my No. 5 player in the 2022 draft class. This would be an absolute steal for Howie Roseman and the Eagles.

Pick 18: Trent McDuffie, CB, Washington: McDuffie is one of my favorite players in the draft class. He’s smart, tough and instinctive. He’d fit in beautifully across from Darius Slay.

Pick 15: Kyle Hamilton, S, Notre Dame: This is quite a fall from where I first mocked Hamilton, but the talented defender’s slide down the board ends up being the Eagles’ good fortune.

Pick 18: Kaiir Elam, CB, Florida: Philadelphia has an obvious void at one cornerback spot. Elam has been a riser in the draft process thanks to strong interviews and a solid showing at the combine.

Pick 13 (trade up from 18): Jameson Williams, WR, Alabama: I think the Eagles get aggressive — trading away Pick Nos. 18 and 51 overall to Houston in exchange for No. 13 — to ensure they get the wide receiver they covet. Williams is the burner of this receiver group and, when healthy, would join former Alabama teammate DeVonta Smith.

Pick 15: Jordan Davis, DT, Alabama: The Eagles boost their defensive interior with the mauling big man who is a unicorn at defensive tackle.

Pick 15: Jameson Williams, WR, Alabama: It’s never a bad idea to add receivers from Alabama! DeVonta Smith was a marvel as a rookie after the Eagles took him 10th overall out of ‘Bama last year. Williams would be another tremendous target who creates splash plays downfield and stretches defenses vertically. QB Jalen Hurts will have a chance to cement his position as the Eagles’ leader for years to come.

Pick 18: Andrew Booth, CB, Clemson: The Eagles got their receiver with their first selection of the round. Now, they get the CB they covet, someone who can play opposite Darius Slay. On film, Booth looks like he would be comfortable in any system; he would adapt well to Philly’s zone-heavy scheme.

Pick 15: Chris Olave, WR, Ohio State: Yes, this would be the third consecutive receiver drafted in Round 1 by the Eagles, but the bottom line is, Olave’s big-play ability should make life easier for Jalen Hurts in the pocket.

Pick 18: Devonte Wyatt, DT, Georgia: It is time for the Eagles to fortify the interior, with the 31-year-old Fletcher Cox nearing the end of his career.

Pick 15: Jameson Williams, WR, Alabama: By now, you’ve repeatedly been reminded that the Eagles have taken a receiver in the first round in each of the last two drafts. This anti-Packer philosophy would make it three in a row. Who cares?! Williams is a dynamic downfield threat, someone who’d further aid Philly’s commitment to Jalen Hurts as its franchise QB.

Pick 18: Devonte Wyatt, DT, Georgia: Fletcher Cox is back on a one-year deal, but beyond the 2022 season, the Eagles could be looking for impact players fitting that kind of mold. Wyatt brings superior athleticism to the interior of Philly’s defensive line.

Pick 15: Jordan Davis, DT, Georgia: Flip a coin here. Davis or Trent McDuffie. (And won’t WIP have a good laugh at my expense when the pick is neither guy.) But I’ll go with Davis because of his freakish athleticism at 335, his ability to impact the game all over the defensive front, and the prospect that he can succeed Fletcher Cox (32 in December) as the toughest guy to block on the Philadelphia defensive front.

The best thing I heard about Davis after his 4.78-second dash at the combine (at 341 pounds) was from one coach who thought Davis could play nose on first down and three-technique (the interior rush player) on second and third downs. That’s not common. He didn’t have great college production—19.5 tackles behind the line in 47 games at Georgia—and that would be a big concern to me. But someone will take him in the middle of the round, because he’s got such great potential.

Pick 22 (trade back from 18): Devin Lloyd, LB, Utah: Dart throw. Howie Roseman could trade down again here. The receiver and corner markets, both of which he needs to hit before the end of day two, don’t align with what’s left on the board in this mock. Lloyd had experience doing everything in 32 starts over three Utah seasons. His 43 career tackles for loss show he’s a play-wrecker in the run game too.

One other point about Lloyd, wherever he goes: NFL Network will have an emotional feature story Thursday night about the two Utah players lost to gun violence in 2021. I’m told Lloyd’s words will be emotional and heavy in the piece—he was the Utah captain who had a huge burden on his shoulders helping his teammates get through the double-ordeal.

Pick 15: Jameson Williams, WR, Alabama: Just like DeCosta, I could totally see Howie Roseman admiring Jordan Davis. He sees the same prospect year after year. Davis is simply different, so a slide trade up from 15 and back from 18 makes sense. But in this case, the Eagles add pure juice to the WR room with an eye on 2023 if it doesn’t fully work with Jalen Hurts.

Pick 18: Trent McDuffie, CB, Washington: I tried to give the Eagles five other players. Everyone told me McDuffie. I’m blaming you if this is Karlaftis or Ebiketie. Yes, you!

Should the Eagles have interest in trading for Bengals S Jessie Bates?
Eagles agree to terms with former Giants CB James Bradberry
Sixers president Daryl Morey reportedly has plans to go get another star
Phillies injury updates: Why is Bryce Harper out? When will Mickey Moniak return?
Read Previous