Inside Joel Embiid’s second-half classic in Game 3 vs. Raptors 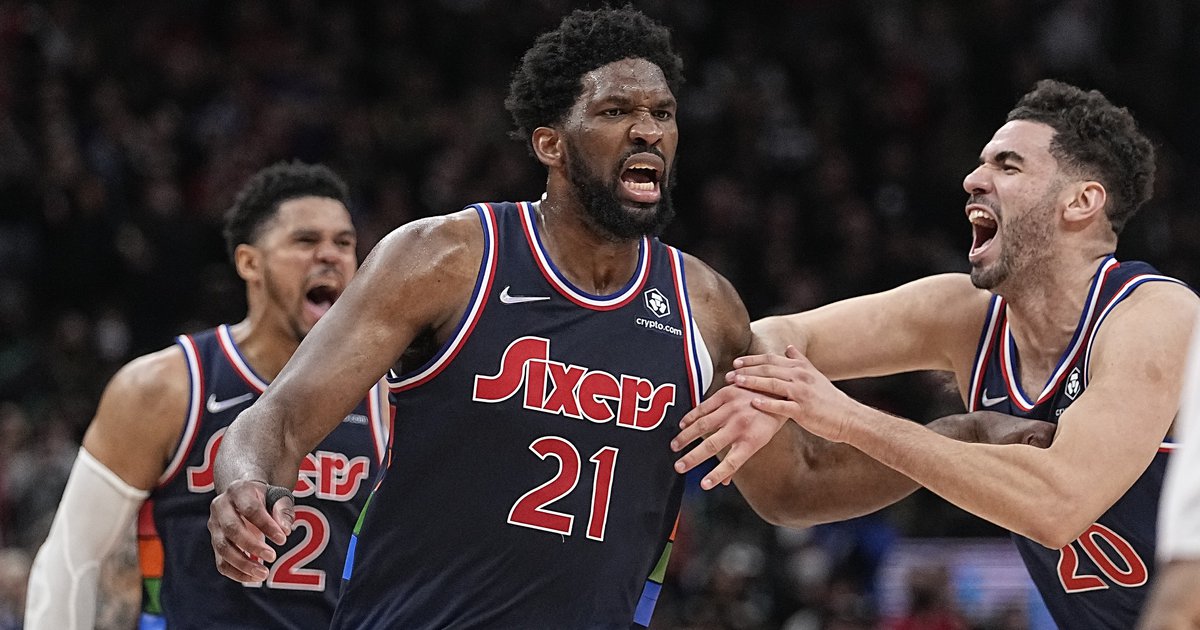 TORONTO — If Joel Embiid was excited to lay Toronto-based demons to rest, he let out all of those emotions in the locker room and the moments immediately following his heroic, game-saving shot in overtime. When he strolled to the podium to talk to reporters roughly two hours after he gave the Sixers a commanding 3-0 lead over the Raptors, the trash-talking with Drake and jubilant leaps into the arms of teammates had faded from view.

“Obviously, we know what happened a couple of years ago, it felt great. I just knew that coming in here tonight it was going be, obviously it’s always a tough place to play at,” Embiid said. “I knew coming into Toronto I was definitely going to be the bad guy for quite some time. I just wanted to come out and just let the game come to me.”

These are the type of games the Sixers never win. If you would have laid out the conditions to a Sixers fan prior to the game — 22 turnovers, James Harden fouls out, DeAndre Jordan is in the game on the final play of the night — most of them would have wondered how many points they lost by, not whether they lost at all.

The Sixers spent roughly half of this game playing as if they wanted to give it away. They would each credit the Raptors for their physicality and their determination to create chaos, but kept circling back to their own miscues. Even Embiid, owner of a 33-point, 13-rebound performance, wouldn’t distance himself from his six turnovers, lamenting his approach to start the game.

“That first half was as bad of a half as I could have played,” Embiid said. “Just throwing reckless passes, not taking care of the ball, not really being involved in the offense and not being aggressive enough.”

There to keep Philadelphia within striking distance was James Harden, who would ultimately finish the game with a 19-6-10 line in 38 minutes that felt a bit louder than that. With Embiid in a funk to start the game, the Sixers ended up leaning on Harden for much of the first half, relying on him to beat favorable matchups and score against a Raptors team offering less help toward the paint.

What followed were some of Harden’s cleanest finishes at the rim since he joined the Sixers in mid-February. When the Sixers were able to get him lined up with Fred Van Vleet and Gary Trent Jr., Harden was able to win quite a few one-on-one battles. Putting pressure on the interior, as we have seen time and time again, can lead to great things for everybody else.

“James kept it together for a long while for us with his attacks, his decision making,” Doc Rivers said after the game.

That long while took the Sixers into the second half, when saying that Embiid carried the offense is not descriptive enough. Embiid managed to score 23 of their 49 points in the second half, and five out of nine in the overtime session, he and Tyrese Maxey the only Sixers players to register a point in the extra session.

Each buried jumper and each second-half trip to the free-throw line seemed to fray the nerves of the Toronto crowd. There are few experiences like watching a road player rip the hearts of an entire arena out on a possession-by-possession basis. Jubilation melts into anxiousness, a hush falling over the crowd. When you hear the sound of 20,000 people murmuring all at once, you never forget it.

Pace was perhaps the biggest difference between the Embiid of the first 24 minutes and Embiid of the final 29 minutes, the big man wasting far less time before going at whoever was in front of him. That meant a variety of different things depending on the possession. It was a one-dribble blow-by of Precious Achiuwa, a kick-out pass for a Georges Niang three out of the middle of the floor, or a ferocious dunk on Pascal Siakam, Embiid slipping a screen with nothing but runway in front of him.

“Every single time I put the ball on the floor, they were coming,” Embiid said after the game. “In the first half, they did it, in the second half, they tried to do it…Really, I knew that all I had was one dribble and I had to make a play, whether it was for myself or for my teammates or to get the shot off. That was really my mindset coming out of halftime. Be aggressive, but at the same time be decisive about what I’m doing on the floor.”

“I thought we had him deep four or five times in the first half and he was trying to get into his move, and when you get the ball in the paint, there’s no more move, there’s just go be aggressive and big. Quick decision, quick moves for him,” Doc Rivers added. “I thought he made the adjustment.”

Philadelphia’s worst offensive possessions late in the game were when Embiid and his teammates didn’t abide by that approach. Harden fouling out of the game on a controversial whistle in the final 30 seconds robbed them of one of their best decision-makers. That was apparent, Rivers said after the game, in the attacking windows missed by the players left on the floor, Maxey included, despite Maxey being one of the only guys who had anything left by the time the overtime session started.

Even Philadelphia’s game-winning possession was nearly derailed by that decision-making paralysis. They were saved by a Doc Rivers timeout with the shot clock winding down and Embiid on the verge of turning the ball over near the sideline, giving everyone a chance to catch their breath and regroup. Less than a second left to get it done, Philadelphia nonetheless drew it up to have multiple options. The only one that mattered ended up in a spot that he’d been in with the game on the line in regulation, redeeming himself for the first miss.

“I’m thinking about, there’s a reason why I went to that spot to end the game before overtime,” Embiid said of his mindset in that moment. “I like that spot, we worked on it a lot, that stepback going left. Going back to that spot, I was just confident enough to, first of all, get the shot off and try to make it.”

A good decision, I think it’s fair to say.

The man who ultimately gets the credit for the game-winning bucket, well, that was a subject of some debate. According to Maxey, Tobias Harris strolled into the locker room postgame and puffed his chest out in celebration of the screen he set to get Embiid free. And for the third straight game, let it be said that Harris had no small part in their victory — his defensive toughness was a huge part of slowing down Siakam, and he ripped the ball from Trent Jr. in a critical spot during overtime, ultimately taking the turnover and opting to wait for his buddies to catch up instead of trying to succeed in scramble mode.

“No. 1 screen [I’ve set] for sure,” Harris joked about the game-winning play,” because I don’t set too many.”

At the end of the day, playoff basketball is often decided by the binary system. Either you have the best guy on the floor or you don’t. If you don’t, you’re often hoping and praying the opposing star falters.

On a few levels, you might consider this a theft for the Sixers. But for this writer, that would minimize so much of the work it took to get it over the line, stripping away the collective poise they showed to hold it together with rubber bands, glue, and a healthy portion of ball screens.

It was that fact, not the game-winner, that seemed to stick in the minds of Sixers players after the game. At the podium and in the bowels of Scotiabank Arena, they pointed out everything that went wrong, including a wrist/hand issue for Joel Embiid that warranted a soft brace on his shooting hand after the game. Problem after problem, many self-inflicted, kept popping up. They managed to overcome them all.

It is the sort of character win a team with this little time together isn’t supposed to have in the arsenal, one only available to a contender after a lengthy period of building up sweat equity. The Sixers didn’t need that.

“That’s what the playoffs [are] about,” Harden said. “I kept talking about it in the regular season. It might not have been the prettiest game, but we found ways. Defensively, we were really good down the stretch…we gave ourselves a chance to win on the road. That’s all you can ask for.”

“These types of games matter a lot,” Embiid added. “You don’t have anything going on for you, but you still find ways to win the basketball game. This is good for us.”