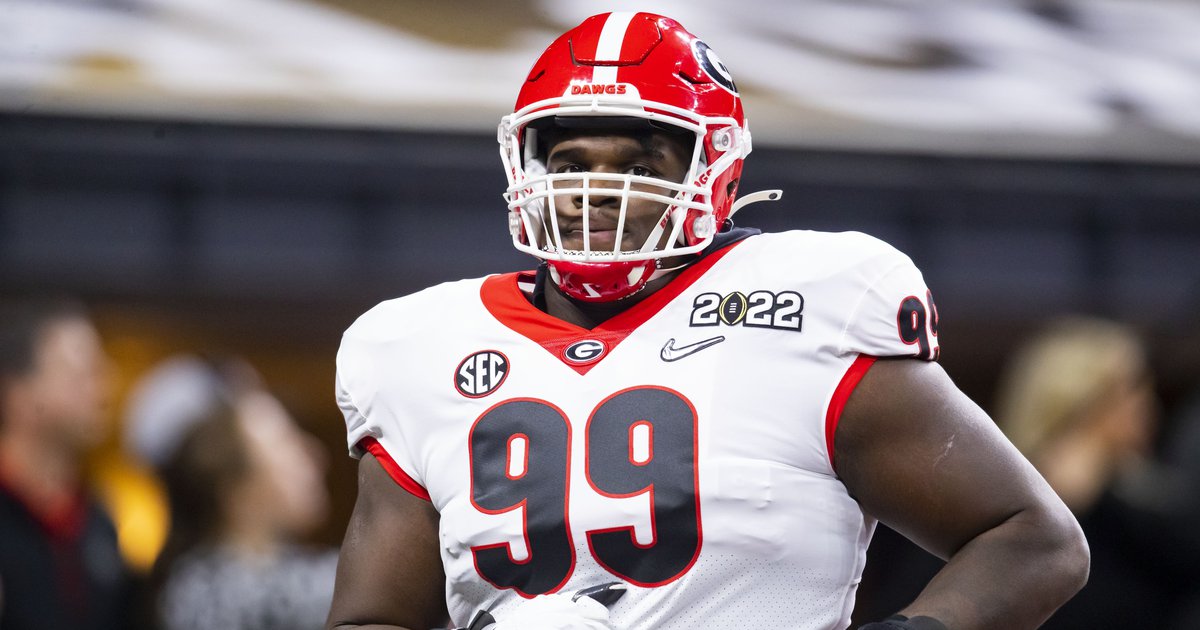 What I liked about the Eagles’ 2021 draft haul was the premium it placed on culture-changing players, players who came from winning programs and who could bring that identity to Philly. Alabama’s DeVonta Smith and Landon Dickerson, the Eagles’ first two selections, respectively, were immediate impact players and look to have Pro Bowl upside.

The Eagles would be wise to continuing targeting players with such pedigree. Yes, talent is talent and teams should grab it when it can be found, but, to put it simply, the highest-level talent is coming from the SEC and Big 10. Go after those dudes. I wrote last week about how the Eagles should go all-in on players from the SEC:

What I’m ultimately getting at is that the Eagles don’t need to overthink things. Just draft players from the SEC. Really. That’s it. Do that and the team’s hit rate in the draft will improve exponentially. Look no further than what the Eagles did in 2021: Alabama’s DeVonta Smith and Landon Dickerson, the franchise’s first two picks in last year’s draft, were studs as rookies. Two guys who played at the premier collegiate program in the whole sport and played against the toughest competition in the country are good NFL players. Shocker!

Look at Jalen Hurts. Sure, he might not be the Eagles’ franchise signal-caller for the next half-dozen years, but to get a winning record and playoff appearance with a second-round QB is a pretty dang good return. He battled at ‘Bama! It’s no surprise he has the guts for this.

In my first mock draft for PhillyVoice, I’m making good on my prior SEC take. Using the wonderful simulator at The Draft Network, I made 10 picks for the Eagles. Seven of the 10 players came from the SEC. Heck, four came from the reigning national champion Georgia Bulldogs alone. Another came from the Big 10, a conference I still value highly (as opposed to the Pac-12 and Big 12 and non-Power 5 conferences…). One more came from Clemson, perennially a championship contender even though they’re in the ACC. The last one came from Miami, who, while no longer the school they were in the early 2000s, are still feisty.

Here’s what I came away with:

Davis was the fulcrum of the best collegiate defense I’ve seen in my two decades watching the sport. He’s a hulking presence in the middle of the field that can distort whatever an offense is hoping to accomplish at the line of scrimmage. I’m not a “spider graph over all” when it comes to evaluating prospects in the first round, but this is a big man who can move:

I see people’s concerns about conditioning and that he won’t be a three-down player in the NFL. That’s overblown to me. He will adjust to the pros as every player does. Davis won’t be required to be a Day 1 starter anyway, given that the Eagles already have Fletcher Cox, Javon Hargrave and Milton Williams along the interior defensive line. That’s fine. He will be an impact player in whatever playing time he receives with the optimism that he could be the best defensive player in this entire class come a few years from now.

The Eagles build their teams through the trenches. Always have. They’ve made 11 first-round picks since Howie Roseman become general manager in 2010. Seven total have been offensive or defensive linemen. The four defensive linemen (I’m including pass-rusher Marcus Smith in 2014 here) are Cox, Smith, Brandon Graham and Derek Barnett. Three of the four were key contributors for the franchise’s lone Super Bowl team. Cox has been selected to numerous All-Pro teams and Graham is the man behind the greatest play in the history of Philadelphia sports. This strategy has given the Eagles clear results.

I just get the feeling that Davis is the exact type of player the Birds love to. If he’s available at 15, I expect he’ll hear his name called and he’ll be photographed holding up a midnight green jersey.

Williams spent two rather quiet seasons with Ohio State (three touchdowns in 10 total games played) before transferring to Alabama before the 2021. Like a bevy of Crimson Tide receivers before him, he had yugggggeeee college production.

He stacks up well with some legit great NFL wideouts!

Williams suffered a torn ACL in the 2022 National Championship Game for the Crimson Tide in their loss to Georgia. I’d imagine if Williams was fully healthy, he’d more than out of the Eagles’ range currently, but that injury is just knocking him down enough that he could land in Philly.

If the Birds draft Williams, this would mark the second year in a row that the Eagles draft an Alabama player coming off an ACL tear. They landed Landon (see what I did there?) Dickerson with the 37th-overall pick last April. Dickerson missed training camp and the start to the season in 2021, but he played in 14 games and made a formidable young pairing along the left side of the line next to Jordan Mailata. Eagles fans could be watching those two dudes bash defenders for the next half-dozen years and picking up a handful of Pro Bowl nods along the way.

Williams missing, say, the first two months of the season would undeniably suck. The Eagles aren’t going to be Super Bowl contenders in 2022, but the team and their fan base certainly wants to win games and see the franchise push for their fifth postseason berth in six years. Not going to lie: even if he misses games to start the year, Williams might still end up with better stats than Jalen Reagor and J.J. Arcega-Whiteside have, respectively, in their entire pro careers!

I know injuries can scare off fans. I get it. This isn’t a case akin to Sidney Jones in 2017 though. An Achilles tear, especially for a cornerback, is way more detrimental to a player’s future prospects than an ACL tear. I don’t understand it, especially given where sports medicine was 15 or so years ago, but players are coming back from ACL injuries across sports and performing just fine, if not better! Waddle caught 104 balls last year after suffering a broke ankle in his last year at Alabama. Williams will be okay.

Williams can take the top of the defense with his explosiveness, he should be a YAC machine and he’s a smooth route-runner that should lead to the dynamic play the Eagles are starved for. Williams and DeVonta Smith anchoring the position in Philly? It’d be great for Birds fans.

The Eagles need safety help. That’s abundantly obvious. An upgrade is needed over Anthony Harris and Marcus Epps, the team’s two current starting safeties. I made a worthwhile trade up to land Cine, another Georgia player who is a first-round talent. Modern safeties need to be versatile. Give me a guy who’s at least okay at everything, pair him with a legitimate defensive coordinator and watch that player flourish.

Let’s pull up another spider graph that showcases Cine as one of the most agile and quick safety prospects in recent memory:

Goodrich isn’t as heralded as another Clemson corner, Andrew Booth Jr., who will likely go in the first round. Still, Goodrich brings big game experience from several College Football Playoff games, recorded five interceptions over the last three seasons and had nine pass breakups in 2021 alone. Those PBU numbers give me confidence about his ball skills at the next level, knowing where and how to target the ball at the catch point against opposing wideouts. He’s undersized, but given his ability as a press corner, maybe there’s a bit of a dog in him that could be unlocked.

I like to bank on archetypes. My rationale for going for another stud Alabama wideout illustrates that. The same could be say for a guy coming from Linebacker U. Smith is a bit unpolished and his production was low before an 81-tackle season in 2021. That’s why he’s fallen to Day 3 of the draft. The athletic profile screams, “This guy is an NFL player” though:

He should be a killer special teams player to start off with the potential to turn into a serviceable starting linebacker in the years to come. The Eagles’ linebackers are frequently maligned (with good reason at times), but the team’s got competent play out of Shaun Bradley, a sixth-round pick out of Temple, and T.J. Edwards, an undrafted player out of Wisconsin. Smith could supplant Edwards (or another bargain-bin guy) for a starting job in a year or two depending on how many resources the franchise pours into the position and maybe push for playing time in 2022.

If I ran an NFL team, I’m drafting a running back on Day 3 every year or at least every other year. It’s a position where you can find talent late. Unfortunately, running backs’ careers don’t last too long compared to other positions given the beating they take. It sucks when they hit free agency and can’t get a big deal their previous production commands, but that just happens to be the nature of the modern NFL.

I don’t envision Miles Sanders being on the Eagles beyond 2022. Kenny Gainwell was a nice boost in 2021 as a rookie with six total touchdowns. Jordan Howard looked like 2016 Jordan Howard. Boston Scott was always there to provide some juice when it’s direly needed. Those components, along with Jalen Hurts at QB, allowed the Eagles to have a historically great rushing attack. Howard won’t be back. Another guy is missing from that rotation. Enter White, yet another Georgia national champion coming to Philly in this mock draft.

White feels, to a degree, like a sound Howard replacement given his downhill running style that oozes physicality. He’s not a threat in the passing game, but the guy just pounds the rock in the way the Eagles did with Howard in 2021 and will be looking to do again this upcoming season. Over his last two seasons in Athens, White averaged 5.4 yards per carry and scored 22 total touchdowns.

Again, looking at archetypes, give me Alabama receivers, Penn State linebackers and Georgia running backs. Things will work themselves out from there.

The Eagles love taking on projects with Day 3 offensive linemen draft picks. They also love versatility. Fortner projects as a center, where the Birds continue to have a number of options to eventually replace future Hall of Famer Jason Kelce. Fortner, however, has experience starting at guard in the SEC too, which is huge. Teams should want their backup offensive linemen able to man multiple spots along the line. Fortner’s experience at Kentucky in a run-heavy scheme intrigued me given the way the Eagles ran the ball in 2021 too.

Kendrick, a Clemson transfer who found himself on that monster Georgia defense in 2021, recorded four interceptions last season, including two in the College Football Playoff semifinal game against Michigan. Big game experience. Premier conference background. Ball skills. I don’t care how raw he might be, teams could do a lot worse than banking on those traits on Day 3.

A good athlete at linebacker who can else provide some juice as a pass-rusher? That sounds just like Gannon’s m.o. on defense. Clark had 135 total tackles and 5.5 sacks in 2021 at LSU while going against loaded SEC opponents that I continue to (and will not stop) harping on. High-motor dude. He was a captain on the Tiger’s 2019 national championship team. I could envision him making some huge plays in camp and the preseason before fans yell, “WHY ISN’T HE PLAYING MORE?” the first time Edwards or Bradley has a missed assignment in Week 1.

Any guy who’s worn the Turnover Chain is welcomed in Philly as a seventh-round flyer:

The Eagles need depth pieces at safety. It’s a sound end to the draft for the Birds.