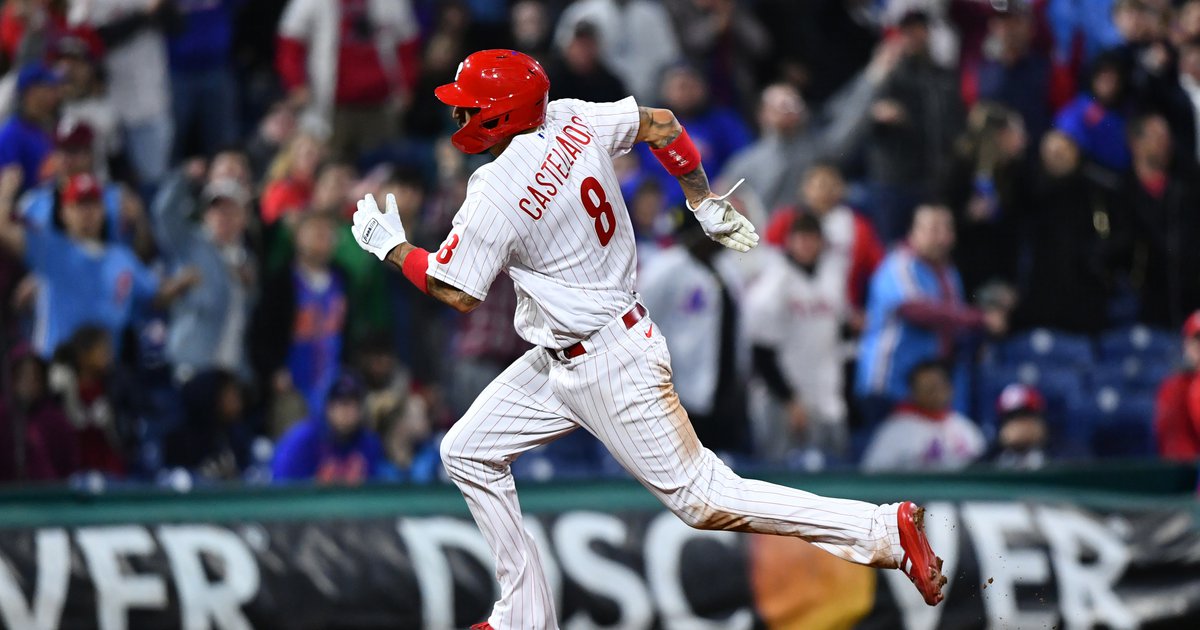 After sitting in Citizens Bank Park for four of the Phillies’ first six games and watching the other two at home, what I know about the team is roughly what I expected.

The Phillies’ starting pitching is shaking, including the enigma that is Aaron Nola, but strong at the top with Zack Wheeler, who’s coming along well after an offseason injury.

Their bullpen is a step above “this is the worst collection of relief pitchers in the history of mankind,” which is good! Just found out that the nickname for Brad Hand, who’s in Philly on a one-year deal and hasn’t surrendered a run in two appearances, is “Brotein Shake,” as listed on baseball-reference. He doesn’t look like David Wells or anything, but that one is a tad confusing. Anyway, the Hand addition, plus what Phillies fans have seen from Seranthony Dominguez, is encouraging.

Defense? Well, I’m not here to be the umpteenth person to bury Alec Bohm’s fielding woes (props to him for owning it, Philly appreciates self-awareness from its athletes). Bohm’s infamous three-error game aside, considering he might not even end up being a regular in the lineup, I’m not ready to brand them the worst defensive team of all time. Small victories to win the eventual war?

The offense is getting itself right. Again, I’m dealing with small-sample sizes, but am I supposed to way until June to do any analysis of this team? The played the games they played! Here are their rate stats compared to the rest of the National League: batting average of .237 (eighth), on-base percentage of .321 (eighth), slugging percentage of .419 (third), OPS of .740 (fourth).

The Phils are smashing the ball (second in NL with seven homers). If I asked someone to predict the three Phillies players to have an OPS over 1.000 through two series, I sure as heck wouldn’t expect the guesses to be Bohm, Jean Segura and Johan Camargo. As for the Phillies’ more star-studded sluggers, Rhys Hoskins and Nick Castellanos are absolutely raking too.

Reigning NL MVP Bryce Harper is off to a slow start (though he did hit his first homer on Wednesday) and Kyle Schwarber has been struggling since leading off the season and his Philly career with a solo shot. Cause for concern? No. Regression will come for those two as they start crushing the ball, just as Camargo won’t hit an absurd .500 all season.

It’d probably be for the best that they don’t wait until the eighth inning to get hot each game though, right? Perhaps with a more stable rotation, they won’t find themselves needing to pull off wild comebacks. Again, it’ll likely all even out (“You’re Even Steven!” as Kramer once said), but it’s not pairing well with the substandard pitching performance the Fightins have been putting up.

My rule on small-sample size evaluation for Philly teams is that if things are going well, they’re going to keep going well. If they’re bad, eh, they’ll figure it out.

The most important quality of them all: VIBE CHECK!

After winning their first two games of the season against the Athletics, seeing how packed CBP was, scarfing down a burnt end cheesesteak, it felt like the Phillies of my high school years were back. Baseball is certainly the most nostalgic sport there is. It transports you to a different time, a different moment in your life that feels long forgotten, one that always seems simpler in retrospect.

The Phillies may sitting there with a .500 record, but Citizens Bank Park is once more the place to be on a beautiful spring day in Philadelphia (have you seen all the Instagram stories of people at CBP?). Having an entertaining squad to watch all summer is something Phils fans should be thankful for.

The Phillies are about who I expected them to be that season and that’s more than okay through six games.